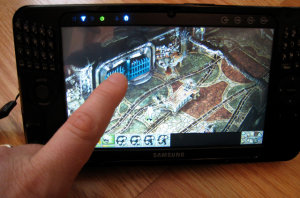 I consider “old-school” gaming to be the pen & paper stuff, where you roll dice and track hit points, but I’m old like that. At the end of my gaming days, I used my Tablet PC for rolling dice electronically, tracking my stats onscreen, organizing character notes, and accessing digital game books. Jon Stokes of Ars Technica, on the other hand, has a more high-tech view of “old-school”, citing such games as Baldur’s Gate and Fallout when he rediscovered their awesomeness on a Samsung Q1 Ultra Premium UMPC (which he unfortunately only calls a “tablet PC”). A few choice quotes…

…it was as if the RPG gods had created the tablet specifically so that I could reach retro RPG nirvana (or maybe Valhalla, or some outer plane whose name escapes me at the moment).

Thumbstick and directional pad: Samsung actually expects people to do some gaming on these units, so they’ve helpfully included a PSP-style thumbstick on the left, and a directional pad on the right. The [thumbstick] is useful for scrubbing the pointer rapidly across the screen (e.g., when panning across a map to find an item or character); you can also use it to scoot the pointer to a specific location (vs. trying to tap with the stylus), or to click and drag.

If you’ll recall, back when Microsoft was actively pushing their Origami concept, gaming was promoted as one of the selling points. Sadly, that never came to pass as the gaming focus at the time was on making them bigger, better and faster, while the UMPC was mostly on the opposite end. But with the rise of iPhone gaming and the focus on alternate gaming tools, like the Wiimote and Guitar Hero guitar, perhaps the time has come for gaming on mobile PCs. Reading Jon’s story, one gets the impression the UMPC was just a bit too ahead of its time.