At CES 2012, we got our first look at the new OLPC XO 3.0 tablet from the One Laptop Per Child program.

This tablet isn’t going to compete with the Kindle Fire or the iPad 2. Instead, it is aimed at bringing computing power to children in developing countries.

The OLPC X0 3.0 has a Marvell chip and is powered by a 1GHz ARM processor and can run Android or Chrome OS, including a customized version shown in the video below.

At CES Unveiled, we caught up with a Marvell rep who showed us the first look at the new tablet, including a close up of the customized layout designed to make it easy to use.

Check out the custom interface of the OLPC XO 3.0, as well as the solar and hand crank chargers.

The solar charger and the hand crank shown in the video are important, as well as the XO 3.0’s ability to be charged by a number of alternate power sources, as developing countries will not always have reliable access to power. 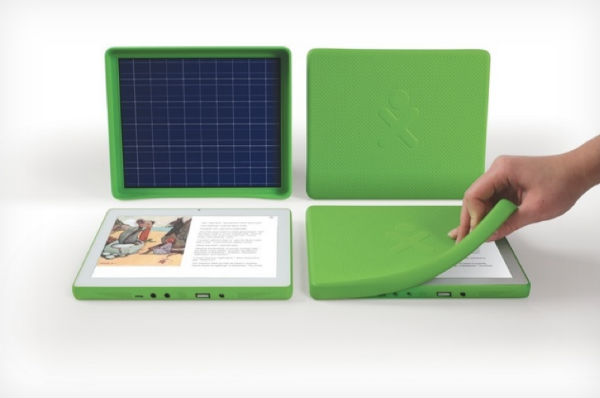 OLPC is hoping to use a Pixel Qi display on the tablet, but that will be an option, and not a standard feature so that the company can come close to the target price.

Announced back in 2009, the OLPC XO 3.0 had a target price of $100, but we weren’t able to confirm any pricing during our brief chat at CES. That doesn’t matter much to most consumers since this tablet won’t be sold at retail. Ideally, OLPC will sell these educational tablets in bulk to countries.

One of the apps shown off, and a focus of this tablet, is to bring education and programming skills to children in developing countries. OLPC XO 3  has apps that are designed to help children gain skills to compete in a global workforce.