Black Friday has become in many ways an American cultural tradition and also a shoppers and retailers’ nightmare. The feeding frenzy is certainly intense. Expectations dance like visions of sugar plums in kids’ dreams of Christmas morning. Long lines, tricky manipulative advertising, thronging crowds, and even a bit of violence thrown into the mix occasionally when things get out of hand. All to the tune of ching, ching, ching.

Well, now it looks like the same sort of thing has hit the on-line world as well. Apparently on-line retailers 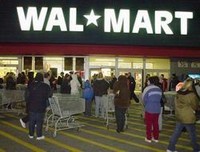 Walmart and Amazon.com suffered delays and outages with explanations of not expecting the large demand. Actually, Amazon’s problems came on Thanksgiving Day itself, when it put XBox 360’s on sale for $100 to the first 1000 customers. (They sold out in 29 seconds.)

Add to the mix, the release of new gadgets with manufacturers not being able to meet demand, (IMHO a part of the strategy), and things get tense and crazy. I’ve never understood that strategy (if it isn’t a hedge on balancing supply and demand with a new product, I don’t know what else you call it) and would love to see someone explain the economics that says it is better to leave customers ticked off and frustrated than it is to make them happy.

Now that the retailers are busy trying to create a frenzy around Cyber Monday as the big day for on-line Christmas shopping, I wonder how many more delays and outages we’ll see? Gadget manufacturers are famous for playing the hedge your bets game. Gadget geeks are famous for feeding the frenzy. And haven’t we all learned that the first units off the truck usually have problems?

I wonder if consumers will ever stop playing patsy puppets to the game that retailers and manufacturers play each year? I somehow doubt it. Here’s the question(s). Do you succumb to the madness in stores on Black Friday? Will you be sucking up bandwidth on Cyber Monday?