The first big trip of my traveling season is over and it was a doozy. Chicago and Wisconsin were family stops and then it was off to Las Vegas for CES. I blogged four articles about my prepping for the trip (here, here, here, and here) and now it is time to report on how well the various tools in my kit performed during this mobile excursion.

First a quick recap of my goals for each of my main devices:

During the family portion of the trip around the holidays, I used the X60 to keep up with email and some work, including some blogging. I also continued to experiment with the R2H on a few tasks as CES got nearer. An interesting note on EVDO service. I needed to use the PPC 6700 as a modem in both Chicago and Wisconsin. Intriguingly the connection was much better in the rural wilds of Wisconsin (I was surprised actually to see EVDO service there) than it was in Chicago. I had no issues using any of my devices interchangeably during this portion of the trip, although I found myself increasingly using the PPC 6700 to check email more than I used either the X60 or the R2H.

On traveling, I blogged previously on how well the Asus R2H performed as a media player and it continued to do so throughout. No issues there, only joy. One interesting note about the GPS functionality. Our rental vehicle came equipped with Hertz’s NeverLost GPS system and comparing that with the included GPS software on the R2H (using Streets and Trips 2007–I upgraded from the included 2006 version prior to the trip) showed the stand alone device far exceeding what the R2H offers. No real surprise there, but it does beg for a better software solution if you are going to be using the GPS feature of the R2H seriously. It has been well documented that the R2H GPS software takes quite a few minutes to grab a signal, and comparatively speaking it takes too much time. Not a big deal for me, as I don’t plan on using the GPS functionality that often. 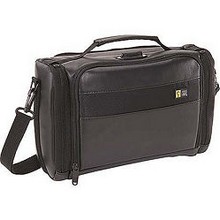 During the Chicago leg of the trip, I headed to Best Buy to cash in a gift card I was given for Christmas. I picked up this Case Logic case, designed for toting portable DVD players. It very handily can carry the Asus R2H, the Battery Geek Portable Power Station, the Stowaway Bluetooth Keyboard and Bluetooth Mouse, and any cables I may need. A great addition for future jaunts where I only want to carry that portion of my kit.

Once I got to CES, I changed plans a bit. The first two days were to be spent in the Vista Lab, learning more about the new OS. I had planned to take the X60 into the Lab and use it as my note taking tool for both days. But, given that this was a try out for my mobile kit, I thought I’d use the X60 on day one and the R2H on day two to see what the differences were. Surprisingly there were few beyond the obvious. The X60 is certainly easier to take notes with given the larger screen, and also easier to use with the keyboard. (I’m also just very used to the Tablet PC form factor.) No question it is faster to operate given the difference in processors. That said, after setting up the R2H with the Stowaway Bluetooth Keyboard, I was able to take notes with both the keyboard and the stylus just as efficiently. I had lousy luck getting a WiFi connection during the Vista Lab and the PPC 6700 came to the rescue as an EVDO modem with both devices. Although there were a few delays using the R2H given the slower processor, I felt equally comfortable using it to do my work in this situation. Battery life was not an issue with either device. The X60 lasted throughout the full morning session and a good portion of the afternoon, after which I managed to plug in for the remainder of the afternoon session. The R2H got hooked up to the Battery Geek Portable Power Station and performed the entire day. (I don’t think I’ve come close to exhausting the charge in what I affectionately have come to call “the Geek.” (Sidenote: I finally got a Battery Geek Tip for the X60 after I arrived home. They are now available for order. I would have used that with the X60 had it been available.)

I had planned to just take the Asus R2H to the convention floor for note taking and any blogging that I would do. I stuck to that plan and here the R2H let me down a little bit. First, there is a completey random (as near as I can tell) problem with rotation. Although using either the built in rotation command (which takes far too much effort to activate) or the URotate utility rotates the screen without fault, there is a random issue with OneNote 2007 (my preferred note taking tool) and Journal. At times when in portrait mode the screen appears and works as you would expect it to allowing inking on the full page. At times the lower third of the screen was funkily cut off, sometimes with a distorted look, sometimes just with a blank unusable space. That issue was resolved simply enough by keeping the R2H in landscape mode, but that is not my preferred screen orientation for note taking. 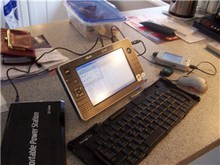 Beyond that, I knew I was headed for a bit of an unavoidable headache by only carrying the R2H on the convention floor if I wanted to do any blogging. It is a much slower task to blog using the pen. While I had the Bluetooth Stowaway Keyboard, that would require finding a surface to place it on, a precious commodity at CES. Talk about a situation when you are just too tired to think straight coming back to haunt you. As we were all registered as members of the press, we were each given a backpack to tote around. The morning before we left I thought I had transferred all of my “CES floor kit” to the new backpack, but I forgot to pack the keyboard. So, as I headed to the press room to lay out the R2H for some lunchtime blogging, I was very frustrated to realize this. I did several blog entries using the stylus, after trying one using DialKeys. Dialkeys just doesn’t work for me, and that may be because I just haven’t given it enough time, but I find it too cumbersome. Perhaps some of the newer skins for DialKeys we were shown at the Tablet PC/UMPC Meetup will make it easier for me to work with in the future and I’m looking forward to trying that out. Needless to say those few entries weren’t done with the efficiency I had hoped for, but the job got done. Thankfully, with the exception of CES, I don’t see myself in this type of situation much.

Note, that I, and others, have mentioned that Rob had the ultimate quick blogging tool with the Fujitsu P1610. No question he was able to operate with more efficiency. That said, blogging the KeyNote address, I used the Lenovo Thinkpad X60 and it worked like a charm in convertible mode. The X60 is the most comfortable laptop I’ve used in my lap ever. (I rarely work in this mode.) Sitting in a chair tethered to my PPC 6700 via bluetooth, I was able to blog the keynote without any difficulty.

There were no surprises with any of the software I was packing. Everything worked as expected for what I needed it to do. OneNote 2007 got the largest workout on both devices. Not only for note taking but for referring to our team schedule, which I printed to OneNote as well as other items of interest I needed quick access to. One interesting software note though. I had Vista installed on the X60 and XP on the R2H. Resizing photos for blog entries was so much easier on the R2H simply because of the XP Image Resizing Powertoy. One right click and you can reduce the size of the photo effortlessly. Although it was easy enough to open up Paint.Net 3.0 to resize a picture,  I do hope someone comes up with a powertoy or other simple right click utility for Vista. It is just so much handier.

In sum, the only real surprise I experienced with my kit was that I relied on the PPC 6700 more than I anticipated and enjoyed doing so.  It was just too simple to check email, or quickly respond to one, with that device than it was to use either the R2H or the X60.

I’m ready for some more traveling in this first quarter of 2007 and pleased that everything in the kit fulfills the tasks I need to perform. For my next trip, I’m seriously debating leaving the X60 at home and going strictly with the R2H to see what happens. I’m anticipating installing Vista on the R2H (even without full driver support) to check that out before I depart though. That said, I’ll probably chicken out and take both as a precaution. For now it is back to rehearsal.