iPhone users who watched Microsoft’s unveiling of Windows Phone 8 may have noticed an enviable feature called Data Sense, which tracks cellular data usage by apps. Thanks to Onavo, data tracking introduced by Microsoft’s data sense can now be experienced on iOS devices, including the iPhone and iPad.

With mobile carriers Verizon Wireless and AT&T Mobility moving away from unlimited data to tiered data plans, users are becoming more aware of how much data they use. In general, iPhone data is counted as an aggregate, and there’s no way by default to know what portion of that data usage is web browsing, emails, downloads, or through Facebook posts and Twitter tweets. With Onavo Count, the data usage information gets broken down to show you how you’re using your data. For instance, if you’re using too much cellular broadband data by surfing the web, perhaps then you can alter your behavior to browse the Internet less unless you’re connected to a free WiFi hotspot. 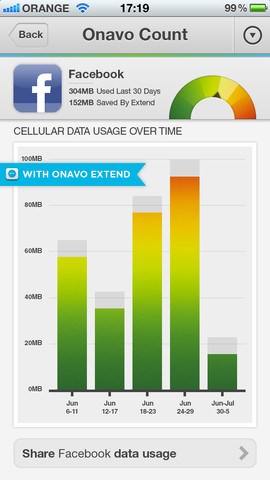 The idea isn’t new to Onavo as Microsoft had introduced app-specific data monitoring as part of its Windows Phone 8 platform earlier this week called Data Sense, which gives Windows Phone users a better way to manage and monitor data. Microsoft’s platform probably taps into carrier’s APIs and the Windows Phone OS-maker says that Data Sense will initially be available on Verizon Wireless and other carriers may follow.

In the U.S., only Sprint and T-Mobile are offering unlimited data plans still, with the former not currently supporting Windows Phone 8 and the latter not officially an iPhone carrier.

But despite public concerns about data consumption in an age of tiered and metered data plans, recent studies show that consumers generally do not use as much data as they think, with the average user consuming just around 1 GB of cellular data. With growing availability of WiFi and free public hotspots, users are increasingly taking advantage of free data connection points that way.

Still, with support for 4G LTE and the growing number of 4G LTE coverage areas, consumers are finding that they can do more with much faster mobile broadband speeds, which shows the dichotomy of what users can potentially do and how they’re limited.

According to 9to5 Mac, Onavo Count is now available as a free download in the iOS App Store.