More OneNote 2007 news today. If you’re looking to reduce your environmental footprint by cutting down on printing, copying, and preparing for meetings and training sections, OneNote 2007 should be a tool in your arsenal for green. Daniel Escapa links to this article, Reduce The Environmental Footprint with OneNote 2007. 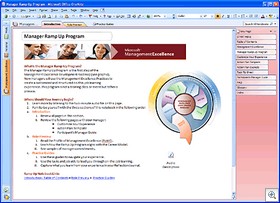 In Daniel’s post he mentions that he almost never prints hard copies anymore. Given that I had such a difficult experience with printer drivers and Vista until recently, I found myself using OneNote 2007 much more for some printing tasks. I used to just fire up the printer almost as a reflex. As a matter of fact, my color laser printer has been sitting with the switch in the Off position for quite sometime.