Logistics. We’ve all heard and seen the commercial. And from the looks of the early reporting about online shipping many more of us were counting on the major shipping companies to have their logistics nailed down so that we could take advantage of deals, free, and expedited shipping to keep Christmas a happy time. I don’t think anyone should be that surprised that snafus in the shipping part of that equation developed. 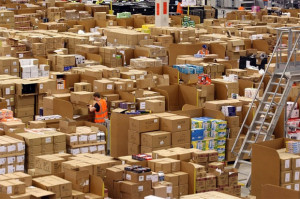 The Wall St. Journal is reporting that Amazon, Kohl’s, and Wal-Mart all ran into logistics problems with UPS and Fedex as some packages didn’t reach customers counting on the “guaranteed delivery by Christmas” promise. Online retailers post deadlines to meet those guarantees and it looks like customers who met the deadlines are some of the ones who didn’t get to meet their delivery person with a package. Cue the chorus of folks hoping Amazon and the shippers get their drone fleets up and running sooner rather than later.

And it’s not just the last minute shoppers who ran into problems. There are reports of folks who purchased merchandise earlier in the holiday shopping season with steep Black Friday or Cyber Monday discounts who didn’t receive their purchases by Christmas.

With online sales expected to take somewhere in the neighborhood of 14% of Christmas shopping sales that’s a lot of packages to ship. Retailers are blaming the delivery services and promising to pay the costs of shipping and/or returns as well as offering gift certificates in the case of Amazon and Wal-Mart.

Did all of your packages arrive by the appointed time? Let us know in comments.

Meanwhile, Amazon is reporting its best holiday season ever and that it now has over 20 million Amazon Prime members enrolled.

Amazon is also reporting that Google’s Chromebooks were two of the three  best selling laptops over MacBooks and Windows PCs. The top three laptops were Samsung Chromebook, the ASUS Transformer Book, and the Acer Chromebook. So much for those who don’t think Chromebooks are worth much. Low cost certainly plays a factor.