Windows Phone 8’s version of OpenTable is receiving an update today bringing with it more features and a support for Windows Phone’s Live Tiles and more.

Users of OpenTable 2.0 for Windows Phone will now have the ability to use any of the three Live Tile sizes supported by the operating system. According to an update on the Windows Phone Blog, the updated tile will be able to showcase any reservations users having coming up.

Though not necessarily as exciting as some of the other features listed, calendar integration will allow Windows Phone users to know what reservations they may have pending for a given day without ever having to open the application itself. Since most users refer to their smartphone’s calendar to manage their day this makes sense. 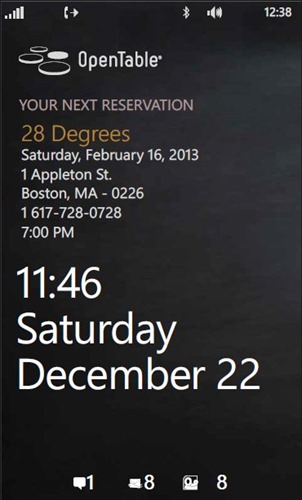 OpenTable now includes lock screen support. Any upcoming reservations will be showcased the moment a user turns on their device. Enabling them to glance and go even faster than they could even with the app’s new Live Tiles.

With NFC or Near Field Communications support, users will also be able to share information about an upcoming reservation or the information about their favorite restaurants wirelessly, though as with all NFC enabled applications, both the users sharing and receiving the information must have Windows Phones that have a NFC chip built in.

Lastly, this update will also bring with it support for Nokia’s HERE maps platform. With HERE integration, Windows Phone users will be able to quickly get directions to the restaurant of their choice without having to copy and paste an address inside Windows Phone’s built-in maps application.

While Windows Phone 8 users do have access to 45 of the top 50 most used applications on iOS and Android, many of them lack the detail of their counterparts in other ecosystems. In the past two weeks Microsoft has also introduced enhanced versions of messaging service Vibr and social network LinkedIn.