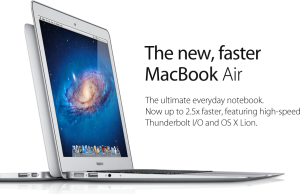 The ‘cloud’ is becoming a big feature of our digital lives today–anywhere from the most recently launched Spotify for cloud-based streaming music to cloud-streamed videos like those on Netflix and Hulu. All of this is driven by the increasing access and availability to the Internet and broadband, either through mobile like on 3G and 4G connections or through desktops and notebooks either by WiFi or Ethernet connectivity. With our growing reliance and obsession on all-things-Internet-related, the latest casualty is the optical drive.

Apple is paving the way in making the optical drive obsolete. After having launched the original MacBook Air sans drive, the company is now introducing its diminutive desktop box, the Mac Mini, without an optical drive.

“Mac mini is designed without an optical disc drive, because these days you don’t need one,” Apple says.

Apple, however, isn’t alone on this–netbooks based on Microsoft’s Windows operating system as well as Linux in the past have eschewed optical drives as well as the more recent launch of the Google Chromebooks, which rely on the Internet for data, storage, and applications and software.

In the grand push towards the cloud, Apple isn’t just offloading peripheral data to the Internet, such as photos, videos, music, and other content–it is doing just that with the core Mac OS X Lion operating system. The Cupertino, California Mac-maker is now relying on its Mac App Store to deliver its latest desktop software, OS X Lion, to consumers. Initially, the operating system will only be delivered via digital download, though the company hopes to help those without fast Internet connections or those unable to download the 4 GB OS through an Internet connection by offering the OS on a USB drive, rather than an optical disc as most retail software are shipped. Other Apple software titles are now marked end of life in their boxed version, but these titles–such as the iLife software, Apple’s popular iWork suite, and others–will find new life as purchasable digital downloads, further negating the need for an optical drive.

In the introduction of the original MacBook Air several years ago, Apple CEO Steve Jobs extolled the benefits of not having an optical drive, including saved weight and size of a system. Potentially, we can see Apple migrating its Pro series to a drive-less system, much like the MacBook Air, to reduce the footprint of its larger notebooks while still delivering power, performance, and battery life.