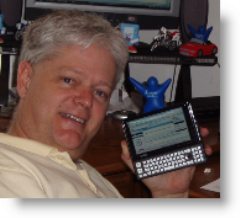 Well, we’ve been talking on GottaBeMobile.com for a while about the “Wow” factor being low to people in the Tablet PC arena.  Rob isn’t being wowed enough to keep him happy, Warner seems to think marketing is a big issue, and for me?  Well, I still love the feeling of opening any new box that contains electronics I have not seen before.

Last week I received a shipment.  Yes — it was ANOTHER piece of electronics to review (yippee!).  The device in question?  AN OQO Model 02.  I had seen the device ever so briefly at CES this year, and we had our request in way back then for an eval unit, but to be honest, I was not jumping up and down in anticipation.  I had spent some time with the small Sony UX models, and was not impressed.  My experiences thus far with UMPC’s has been somewhat lackluster, so I have to admit my expectation levels were indeed somewhat low.  The Model 02 changed that.

Just for balance, here are my “Not like so much things”:

As you will notice I am referring to this thing in the past tense! I had to give it up to the next GBM teamie, Eddie VanDerbeck (darn it, I hate to share!).  I really wanted to keep this one.  I see no problem integrating this thing into my daily work life.  I did not get a chance to plug it into a full size desktop montior and keyboard, but I see no issues using it as a full time PC.

Well, that is about all for now.  I am in the somewhat enviable position of getting to use a LOT of cool toys like this, but this one was special.  As you can see I loved it, and I do not make statements that strong very often.  If it was up to me, OQO would be having a hard time getting this one back.  Our thanks to Bob Rosin and the folks at OQO for a chance to use this device for a bit.  You’ve done a great job here.

UPDATE:  I got in a lot of trouble after I originally posted this for not including Splotch’s comments.  So Splotch old buddy, what did you think about the OQO Model 02?

” Hmph.  I don’t get no respect around here.  All you big organic dudes think we little blue guys have nothing to offer, but you’re wrong, we are great judges of little things.  The OQO Model 02 is incredible.  Trust me, being little can be tough, and this thing does little REALLY well.  It has all the right pieces, in all the right places.  Everyone needs to quit comparing this one to that one and just find one that works for them.  THis one will work for you Dennis.  I will be glad to share your pocket with this thing.  Go for it.”

(Now where is that credit card my wife doesn’t know about?)