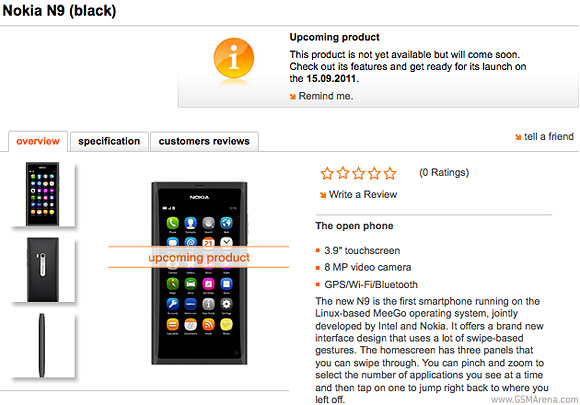 It looks like September may shape up to be a pretty busy month. Along with back to school, the ninth month of the year may be host to the launch of new Windows Phone 7 hardware with the Mango software update, potentially the launch–or announcement–time for Apple’s iOS devices, and now also the consumer availability of the MeeGo-powered Nokia N9 smartphone on Swiss wireless carrier Orange’s network.

The carrier has posted a listing for the smartphone on its page as an upcoming product, detailing some of the main specs such as the MeeGo OS, 8-megapixel camera, and GPS/WiFi/Bluetooth radios. However, it looks like Orange hasn’t announced what pricing the phone will be available at.

For now, Orange’s website says that the device will launch on September 15th. Big choices ahead in the mobile world.