The Milwaukee County Zoo’s three orangutans love playing with the iPad, according to the LA Times technology blog. Earlier this year one of the zoo’s gorilla keepers posted that she wanted iPads for the gorillas to play with. Though she was joking, the zoo received the tablets all the same. But the gorillas weren’t having it.

“It turned out that the gorillas didn’t really enjoy the iPad — ‘they are more stoic,’ said [Jan Rafert, curator of primates and small mammals]…”

Maybe the gorillas wanted a Galaxy Tab, instead. Or perhaps an ASUS Transformer so they could more easily type their emails and Facebook messages. They do have big fingers, after all.

Orangutans are apparently not so picky. They love the iPads and get to use them twice a week or so through the bars of their cages. I know, that sounds really sad. But since these apes are so strong they would probably break he iPads easily. 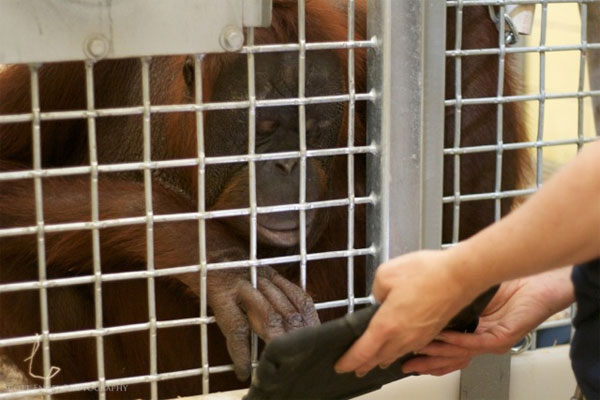 Milwaukee County and other zoos are using the iPads to not only give their orangutans something to do but also to raise awareness about the plight of these mammals: they’re declining in number due to loss of habitat. The conservation group Orangutan Outreach hopes to set up playdates between orangutans in zoos around the world, presumably via FaceTime.

This is an excellent opportunity for someone to step up and design a case for these iPads that will allow them to go inside the cages where the orangutans can better interact with them. Perhaps something that mounts to the cage so they can’t remove it with strong plexiglass on the front that will still pass the electrical charge needed for the capacitive screen to work.

It would also be cool for people to get Facetime calls with the orangutans as well. Or at least be able to peek in on them from their iPads via an interactive video feed. Soon enough you’ll be able to play Words With Friends with them.

I’m looking forward to seeing how this develops and if there are any other primates who could benefit from interaction with the iPad.

But, for the love of bananas, someone please get the Gorillas a Transformer Prime before they get jealous …or worse.