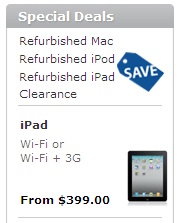 The prediction that the original iPad would continue to be sold at a discount could be partially true. Apple has moved them to the clearance section of their online store and depending on when you check the price, they could have a discount of $100, making the 16GB Wi-Fi model just $399. Maybe.

Can’t say the price cut, if it sticks, adds enough appeal to draw most people away from the iPad 2, but it should be enough for anyone who thinks they don’t want cameras and will be happy with “fast enough”. Oh, and as Josh Smith opined to me, this slashes the resale value of your current iPads (if it sticks). Should have requested those resale boxes from Gazelle earlier like Xavier did.

Update: Flip-flopping price must be a browser issue. Seeing fluctuations in both Firefox and Internet Explorer, but Safari on my iPhone consistently shows the discount. Guess you should use Safari to purchase if you’re interested.