The OS X 10.11.2 update is rolling out to millions of users that all own an Apple computer right now. Apple released the update at the same time as the iOS 9.2 update for iPhone users, TVos updates for the latest Apple TV and a small update for wearers of its popular Apple Watch. The update is free to download for anyone that has the operating system installed already. 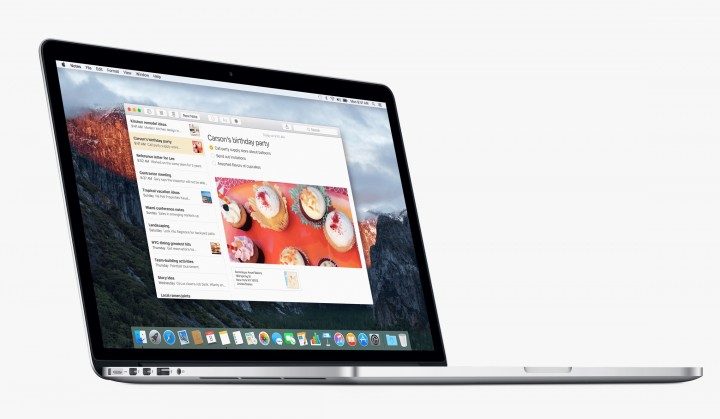 Fixes make up all of the OS X 10.11.2 update. Apple notes that the update “improves Wi-Fi reliability,” finally addressing an issue that some Mac OS users reported with their machines. Also included is a fix that forces Handoff and AirDrop to work correctly on Mac OS. Again, some users reported problems with both features following the initial launch of Mac OS X El Capitan.

Other fixes are related to the infrastructure of Mac OS X El Captain, mainly. Getting photos off an iPhone and on to an iMac is now more reliable thanks to a fix in this update for addressing that problem. An issue that stopped email messages from being properly deleted from a Microsoft Exchange Account when offline is fixed with the OS X 10.11.2 update. That’s huge, as many companies use Microsoft Exchange to power the email and calendar experience of their entire company.

Finally, using the iCloud Photo Sharing library to import Live Photos taken with an iPhone has a fix. Apple only notes that this fixes makes some “improvements.” There doesn’t seem to have been a huge bug with the feature, just some problems with iCloud syncing what users captured reliably. Live Photos are the moving pictures that Apple’s latest iPhones capture alongside standard images.

All told, the OS X 10.11.2 update will come as welcome news for anyone that’s had trouble getting their Mac running properly with the new update installed. Mac OS X El Capitan is the latest update to come to Macs since Apple began giving away free upgrades of Mac OS to owners of its machines. With the update installed, it should be ok for those still holding out to install the software upgrade.

OS X El Captain includes a host of small changes for upgraders. For years, owners of Windows machines could use their mouse cursor to drag apps to the side of their screen and automatically lock them there. That’s included in the update. Note, Mail and Messages are received big updates too. Notes now works and behaves like its counterpart on iOS, the software runs on the iPhone. Messages added gesture support so that users can quickly swipe away or schedule anything in their email inbox.

OS X Yosemite, the previous update for Mac OS users, did all the heavy lifting. It brought the iPhone, iPad and Mac closer together by letting users send and receive text messages from any of their Apple devices. It also featured Handoff, a nifty way to send things being worked on or looked at to different Apple devices wirelessly.

Again, downloading this update to OS X El Captain is free. Some users report that their machines aren’t yet ready to let them download the software upgrade just yet. Others report that they’ve successfully downloaded and updated their machines already. If everything follow’s Apple usual release pattern, everyone will have the software update ready to install tonight into tomorrow.