One of the new main features of Mac OS X Lion 10.7 is the ability to perform gestures which Apple’s Craig Federighi described as coming with a “incredible, physical realism that’s never been possible in a PC operating system before.” 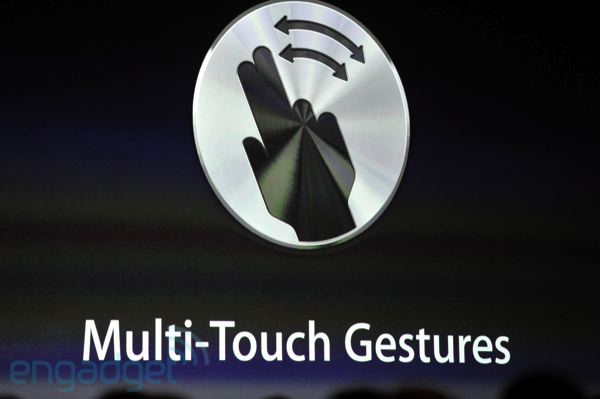 While there had been gestures on Macs before Lion, Apple has shown off the richer gesture experience that the new software will bring. These multi-touch gestures include multi-touch tap to zoom, pinching, and two finger swiping. Scroll bars now don’t appear unless you’re scrolling. The experience was described as being similar to that of Safari on an iDevice.

When moving about your applications in the new Mission Control feature, all you need to do is use a three finger swipe in order to switch between them. Momentum scrolling in the browser now makes “the page feels alive beneath your fingers,” according to Federighi. For example, if you’re on a web page and you double tap, you’ll get a smart zoom on the content.You can also use two fingers to swipe backwards and forwards.

All in all, it looks like a beautifully done experience and it’s just one example of Apple integrating aspects of iOS into their Mac software.