Apple’s Craig Federighi has announced that OS X Mavericks will be available today for all Mac users for free. Previously, OS X updates would cost at least $20, but perhaps what’s no surprise to a lot of people is that Apple has “revolutionized” the pricing structure of its desktop OS, releasing the new version of Mavericks for free.

OS X Mavericks was announced earlier this year at Apple’s WWDC 2013 conference, and has been in beta ever since. However, you can now download the final build of the OS to your computer and begin using all the new features that Apple is touting, including full-screen Maps, iBooks, and new features in Safari.

This is the first time that Apple has made its OS X upgrades free, as most previous upgrades would cost between $20-$30. Apple even took the time during their event today to quickly and swiftly jab Microsoft’s pricing structure, where Windows users have to pay at least $100 to get the latest OS version. 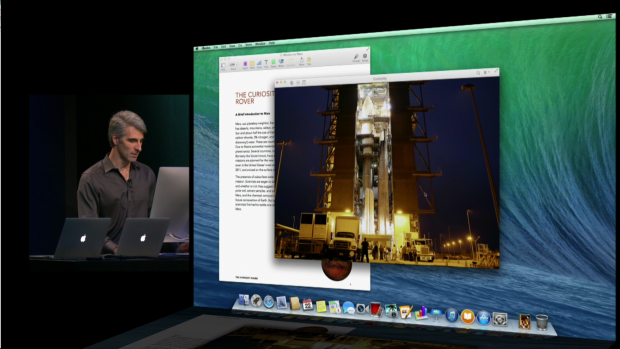 On top of all the new nifty features in OS X Mavericks, Apple is touting that the new OS upgrade will give you an hour more of battery life out of your MacBook laptop, as well as 1.5 hours more of iTunes video playback, which is enough to squeeze in another movie before your battery dies on you.

Plus, Mavericks comes with improved support for multiple displays, meaning that working on more than one display is a lot easier now, and for those who have a MacBook, you no doubt have an external monitor to work on, especially if you’re a power user. Fortunately, you will be greatly benefited by the improved support.

Mavericks will be available later today, and you’ll be able to download it from the Mac App Store. Most Mac computers will be able to get the new Mavericks update, including some machines from 2007.