Apple released OS X Yosemite for Macs last week, adding new features and connectivity to the iPhone and iPad as part of an update for Apple computers. This impressive update unlocks exciting new features but it also brings a number of OS X Yosemite problems that should make some users think twice about updating, at least until Apple delivers a OS X Yosemite bug fixes.

On October 16th Apple announced the OS X Yosemite release and downloads started later that day. The free OS X Yosemite update runs on old Macs, as far back as 2007, although these older machines don’t get as many features as new computers.

For months developers and regular users tested OS X Yosemite betas to discover potential problems, bugs and issues. Through this time we saw performance improve and features come to life, but days after the release users report a number or OS X Yosemite problems. 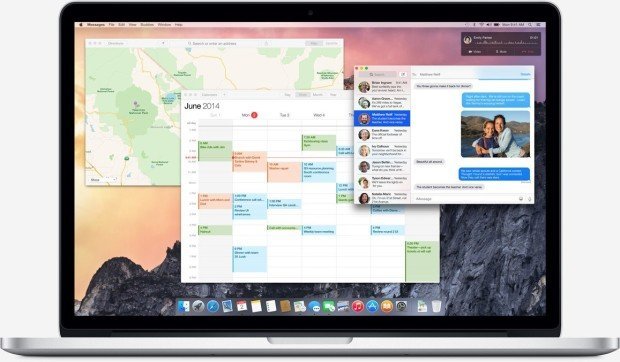 There are ways to downgrade from OS X Yosemite to OS X Mavericks, but unless you have a Time Machine backup and a major problem it is probably not worth it.

On Apple Support Forums, Reddit and social media users complain about OS X Yosemite problems that range from troublesome to downright showstopping. Here is a look at some of the OS X Yosemite bugs you should know about before upgrading. When possible we’ll share fixes for these problems.

OS X Yosemite blank screens and dark screens are common problems. If you see a dark screen after restarting you can try the solution below.

@om Had this exact issue multiple times. Type the first letter of your account name, enter, then password, enter and wait for update screen

If you see it when opening the lid on a notebook you can try closing the lid and waiting 30 to 60 seconds and opening it again. These two options should help fix these issues.

Other similar problems include the Mac taking forever to resume when it goes to sleep or to a screensaver. Printing a calendar that should start on Monday now starts on Tuesday. Creating folders in Launchpad is very challenging, as the image below from reddit user scarlac shows.

Spotlight Suggestions deliver a new way to search without opening browser, but suggestions and Bing Searches don’t work if your language and region don’t match. OS X Yosemite thinks users need to install iTunes over and over. Installing iTunes from the web should fix this issue.

The Notification Center supports widgets, but some users cannot add widgets that are not social. Can’t start a phone call from the Mac, even when the Mac rings on an iPhone call.

Battery life definitely a lot worse after the #OSXYosemite upgrade!!

Battery life is considerably weaker after I updated to #OSXYosemite. What the hell, man? How do I fix this?

Anybody else experiencing lower battery life on #OSXYosemite ?

OS X Yosemite Bluetooth problems are frustrating users. Some people cannot connect bluetooth speakers on Yosemite and others experience Bluetooth audio lag. Other complaints include stalls, no sound and the system locking up with Bluetooth headphones connected. Resetting PRAM may fix some of these issues.

As far as OS X Yosemite performance goes there are some users complaining about lag. After the update your Mac needs to index files and performance may suffer. This should disappear after using the computer for a few hours or so.

does #OSXYosemite kinda lag for anyone?!

We are looking for fixes to these OS X Yosemite problems, and hope to deliver help this week. Some problems may need an OS X Yosemite update, which could take some time. Apple delivered the first x.x.1 update to Mavericks in December 2013, but the company seems to be focused on frequent updates, at least on iOS 8.