Ever since capacitive touch became the go-to system for touchscreens, it’s been interesting to see the different ways people have tried to make them stylus-friendly. Neither as straightforward as the Pogo nor as tasty as a sausage (presumably), this new oStylus is similar to the Dagi in that it has a transparent head but adds a pivot joint to keep it flat against the screen. 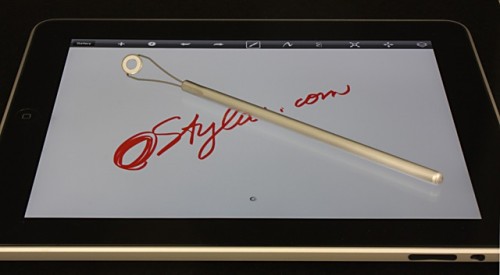 Yes, from a distance it looks like a standard washer glued to a kitchen utensil, but look closer and you’ll see the prongs are attached to the ring head with hinges. This allows the head to remain pressed flat against the screen when used at varying angles. The contact area is vinyl, so no worries about metal being scraped across your display. The prongs look delicate, but they are fashioned from titanium. The ring is stainless steel and the shaft is aluminum.

In theory, the open ring head allows you to see what you are doing without the stylus in the way. Looks effective enough in the demo video, but you can also see the drawn line trailing behind the open part of the ring at some points. It’s only in the deliberate detail work that the oStylus seems to shine. No pricing yet.

Via Engadget and Recombu