OS X Mountain Lion Dictation Review: It's Time to Talk to your Mac

The latest version of Apple’s OS X operating system brings a nifty feature over from iOS. Built in dictation should get more Mac users talking rather than typing. The Dictation feature is similar to the Nuance dictation applications on Windows PC’s and Macs.

Those looking to dictate term papers, novels or long documents will probably want to stay with tools like DragonDictate, simply because OS X’s built in dictation is pretty basic. 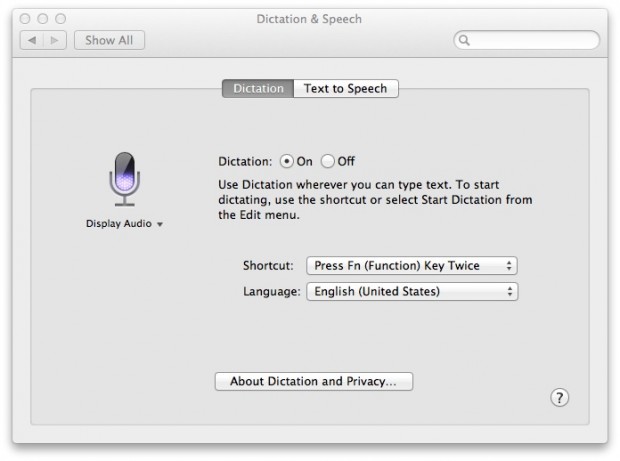 Enable Dictation on OS X Mountain Lion to talk to your Mac. 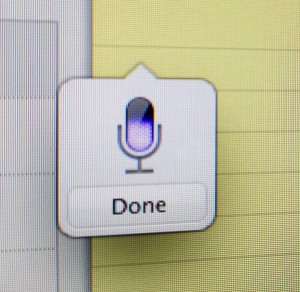 Dictate to any text field.

To access dictation you simply tap the function key twice. Then all you have to do is speak. Unlike more complex applications like Dragon dictate, there is no setup required and Apple can instantly recognize your voice. This is a huge advantage compared to Dragon dictate, where the process of setting up can be long and frustrating.

Mountain Lion dictation does a pretty decent job of recognizing people’s voices. It can differentiate between U.S, UK and Australian English speakers. It can also automatically detect  French, German and Japanese.

Right out of the box, Apple dictation will recognize your contacts names. This is very useful since you might not always use dictation for writing long documents. For example if you’re writing an email all you have to do to find the contact is speak. All you have to do is speak your friend or family member’s name, and dictate a quick note. You can use this for things like typing friends in Facebook, as well.

One of the things I use dictation for is just to get ink on the page. One of the biggest frustrations about starting a document but you don’t want to write, such as a homework assignment, is just getting started. A lot of people can talk about something for several minutes, but have trouble writing even a couple hundred words on the subject. I find it very useful to just talk to my computer like it isn’t an imaginary friend rather than writing formal outlines or dealing with writers’ block.

Apples new dictation tool will recognize opportunities to abbreviate items such as gigabytes, megabytes, millilitres, etc. So that if you speak “five gigabytes” it will turn it into the numeral and an abbreviation (5GB) rather than spelling it out. 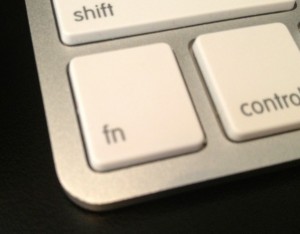 The double press of the function key is an easy way to start dictation, but using dictation for anything longer than a Facebook status update requires pressing the function key over and over again to activate.

Another issue is the 30 second limit on dictation, which limits how long you can talk without pausing to press the function key again.

Unlike Dragon Dictate and Android Dictation, there is no way to see what you’re typing as you speak it.

Unfortunately, the speech to text conversion takes place on Apple’s remote servers rather than your Mac. This causes a few problems. The first is that you need your Mac needs to be connected to the Internet otherwise dictation simply does not work. DragonDictate does not require an Internet connection to work and no matter does Google’s latest mobile operating system, Android 4.1 jellybean. It would be nice for Apple to have an off-line dictation tool like the competition. Of course it would take a lot more resources to make the conversions locally.

There are no auto correction options in Dictate for OS X Mountain Lion. It takes a best guess what you said and writes it without offering corrections or the squiggly red line that you’re used to on iOS.

Dictation is not perfect. For example, the tool had a difficult time understanding the difference between “30 seconds” and “32nd.”

It is important to enunciate and speak as much like a news caster as possible. If you speak words like umm or stutter a lot you’re not going to have a good time with dictation. As with all dictation tools Apple’s has issues with people that have strong accents or don’t use proper grammar. It will not fix grammatical errors it just dictates whatever you speak so don’t expect any miracles.

This tool is good for drafting documents, emails or articles, which is exactly what I’m doing right now, but if you want to rely on dictation for serious work you’re going to want to plunk down the cash for Dragon Dictate.