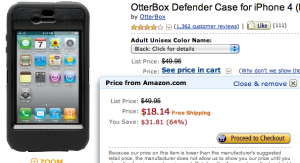 The OtterBox Defender Case is 64% Off

OtterBox makes some fantastic cases that protect gadgets from serious hazards, but they can put a dent in your wallet. Amazon is selling the OtterBox Defender Series Case for iPhone 4 for just $18.14, which is 64% less than its $49.95 MSRP.

I spotted this deal on Friday, just in time to order a pair for Saturday delivery. I gave one to my father for father’s day and kept one for myself.

The OtterBox Defender Case has several layers of protection and makes most iPhone 4 cases look like cheap toys by comparison. A two-piece polycarbonate shell with a built-in screen protector locks in place over the iPhone 4. A silicone cover slips over the shell, serving as a shock absorber. The silicone cover has flaps that protect each of the iPhone 4’s openings. 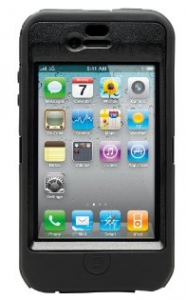 The case comes with a belt holster that’s pretty versatile.  The iPhone 4 can be stowed with the display facing in or out, allowing quick access to the display or protecting it in rough environments.

The result of all these layers of protection is that the iPhone 4 can survive bumps and drops. I demonstrated the case at a family event by dropping my iPhone 4 onto a brick patio from a height of four feet. Both the phone and case were just fine.

We’ve reviewed other OtterBox cases and I’ve always been impressed by their build quality and the fact that they exceed the advertised protection claims.

Here’s a nearly-new iPad being banged around in an OtterBox case.

The OtterBox Defender case is a great choice for anyone that worries about their iPhone 4’s survival. Obviously those who work outdoors or on their feet will appreciate the Defender case. Parents who hesitate handing off their iPhones to small children will also like this case.

If you’re looking for a slim and stylish iPhone case, the OtterBox Defender Case isn’t for you. The extra bulk can be annoying, especially for those with small hands. Another negative is that it takes some time to remove the case- it’s not the kind of case that you can slide on and off at will. This makes it a chore to slide your iPhone into a dock or speaker.

If you’re willing to deal with the extra thickness, the Defender Case is a steal at under $20.