Otterbox first announced the Defender with iON Intelligence during CES 2013. Instead of purchasing a case and backup battery for travel separate, users of this case will get both solutions in a more manageable form factor. In fact many of the add-ons that this case provides lean in the direction of taking the hassle out of external batteries. 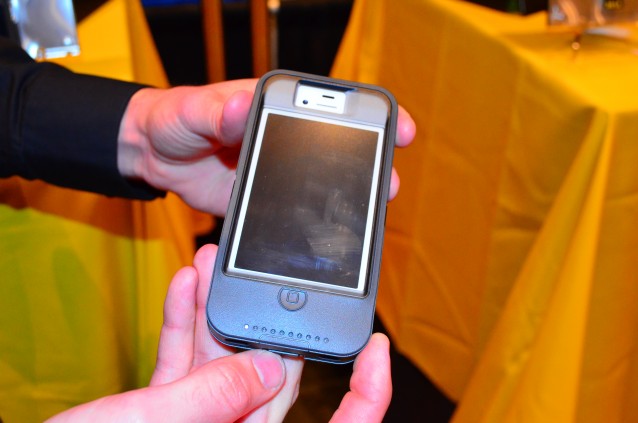 The Otterbox ION is a Defender Series with a battery.

For example, the $129 case doesn’t have a power switch. Using information gathered by a free app via the iTunes App Store loaded onto an, iPhone 4 or iPhone 4S (it isn’t compatible with the iPhone 5) the case will draw power from its own battery before the iPhone’s internal battery ever falls below a 100% charge. The app will also keep users informed of how much battery life they may have left.

Users will always know how much of a charge the case has left due to an LED meter that displays battery life on the bottom of the case. The Defender series with iON Intelligence houses a non-removable 1450 mAh battery boosting the iPhone 4S’ standby time to 400 hours, mobile internet use to 12 hours, and extending video playback to 20 hours per Otterbox’s claims.

Defender Cases by Otterbox are designed to protect a user’s iPhone from nicks, scrapes, and bruises of all sorts, so too is the Defender with iON Intelligence. Included in the price is the same hard plastic that makes other Defender cases durable. Also included in the case is a screen protector, meaning any iPhone housed in the case should be able to stand up well to sand, pocket lent, keys, asphalt, and anything else that it might come up against in a user’s pocket or on concrete after a fall.

As they’ve gained better processors, faster cellular data standards, and bigger screens, smartphones have become increasingly power hungry. Users have are more keen on finding any accessory that can help them stay charged just a bit longer. In addition to the Otterbox Defender with iON Intelligence, Mophie’s Juice Pack Helium, which we recently reviewed also extends iPhone user’s battery life. Though it isn’t as rugged as the Defender with iON Intelligence, it does work on the iPhone 5.