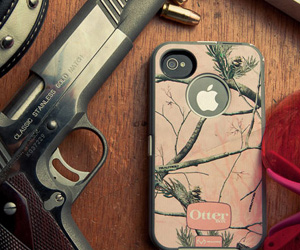 Now you can take your iPhone into the woods with you without giving away your position, unless the phone actually rings. Perfect for hunters and those that just want to look like hunters.

Otterbox has partnered up with Realtree camouflage on a line of Commuter Series cases to offer low-profile protection for the iPhone 4 and 4s. The Commuter series provides great protection from bumps and shocks with a slimmer profile than the Defender Series and the included screen protector keeps the iPhone’s display from scratches. Realtree is the world’s leading camouflage designer who is responsible for thousands of outdoor and lifestyle products using their camouflage patterns, including Otterbox cases.

“The Commuter Series is such a versatile case,” OtterBox Founder and CEO Curt Richardson said. “By combining it with versatile camouflage patterns from Realtree, we’ve struck a perfect balance between aesthetics, functionality and individual personality.”

Don’t worry,  OtterBox also offers rugged Defender Series cases with Realtree camouflage for the iPhone for added protection. You can check out the full lineup on the Otterbox website but the Commuter Series offerings seem to be missing right now. I am only seeing the Defender Series that Otterbox launched back in October 2011 on their website.

The Commuter series is Otterbox’s low profile case that offers protection, but not the extra bulk that the Defender Series provides. I have been using the Otterbox Commuter Series case for my Galaxy Nexus recently and love it.