Our Hands-On Experience With the iPad 2 (Video) 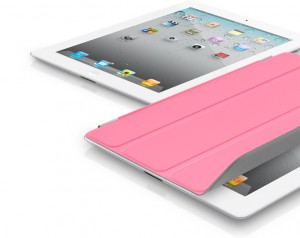 Apple’s iPad 2 is one of those things that you have to feel to truly experience. To reiterate Steve Jobs’ reluctance on being dependent upon specs, the numbers–33% slimmer than the current iPad, thinner than the iPhone 4, and 0.2 pounds lighter than the iPad 1–don’t really do the device any justice. In reality, when holding the iPad 2, it feels a lot slimmer and lighter than the numbers would lead you to believe, and is definitely more comfortable to hold than the heftier Xoom, which clocks in at 1.6 pounds, 0.1 pounds heavier than the first generation iPad.

That said, the device sports the same display–size, technology, and resolution–as that found on the first generation iPad, which is either a good thing or a bad thing depending on who you ask. Users complaining of the screen having glare and being hard to read under direct sunlight will still have those complaints with the second-generation tablet.

However, if you’re pleased with the screen on the first-generation tablet, the display is really the window into the soul of the iPad 2. The vibrant screen really affords wide viewing angles, which is great when combined with a Smart Cover that’s used to prop the device up and share your tablet experience with a crowd of family and friends huddled around the display. Also, the screen will showcase the fast-action performance of the A5 processor, which is custom built by Apple.

With the new A5 chip, the iPad 2 gains twice the processing power and up to 9 times the graphics performance of the previous generation A4 chipset, according to Apple. That means, combined with the vibrant screen, you’re going to have a very immersive experience playing games, watching videos, and experiencing any number of augmented reality apps, thanks in no small part to the rear-facing camera which can layer a virtual world on top of your real world as seen thru the camera lens.

Speaking of augmented and virtual reality, one app that’s appearing for the iPad 2 is called Roma, which will transport you through a 360-degree experience of ancient Rome, letting you explore the history and architecture of the city.

Speaking of cameras, there are two on the device–a front- and rear-facing one, both great for the Photo Booth application and for FaceTime video calling. Since the iPad 2 does sport a camera, another useful optional $5 app is iMovie, which will allow you edit clips like a pro with themes, sound effects, transitions, and animations with the Precision Editor tool, giving you greater control and flexibility in creating an Oscar-quality work, or near award-winning production while mobile.

Faster, slimmer, better–that’s the mantra behind the iPad 2, and it’s all coming on March 11th in the U.S. in either black or white front bezels with a unibody aluminum back and glass display, dual-core A5 processor with powerful graphics, and starting at $500.