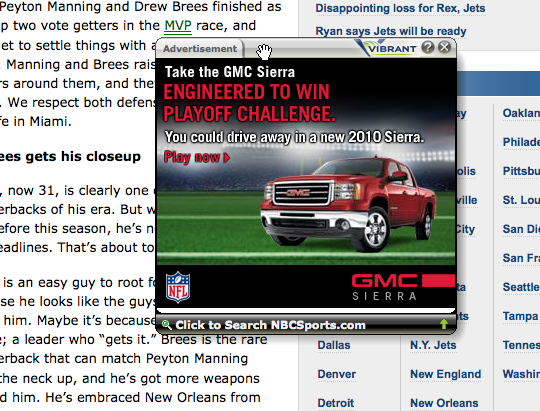 This morning I was in Richmond to visit my mother. I stopped off at a coffee shop on the way for breakfast and there was the usual clientele, several of them soaking up caffeine while hammering on their keyboards. As I was having a bagel and waking up I heard one young lady let out a very loud series of expletives that concluded with “I Hate That @#$% Bing!”

I asked her why. She said it was “those popups that fill your screen when you’re scrolling through a page on MSNBC and other sites. Do they really think I want that happening everytime I scroll down a page? Microsoft can choke on a rotten egg.” (I omitted the profanity. There was quite a bit. The “rotten egg” part is a direct quote.)

I have to admit she’s got a point. Microsoft is making a big play with Bing as it wants a piece of the search advertising pie. Heck, there’s ever a rumor that Microsoft is going to use Bing as the default search engine on the mythic Tablet or the new iPhone. But while I haven’t reached the level of profane swearing when I scroll over a page with Bing popping up, I have to admit is beyond annoying. Methinks, Microsoft needs to address this on some level.