Other World Computing (OWC) announced that its Mercury Aura Pro Express SSD is now available in sizes up to 480GB. That’s a hair under 500GB, the standard offering on Apple’s MacBook Pros. 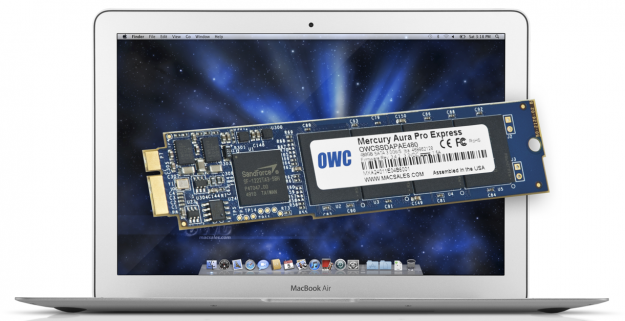 The MacBook Air is the best notebook I’ve ever owned, but I don’t consider it my primary computer. It’s quick enough for most of my daily tasks, but its relatively small drive capacity of 256GB means there isn’t enough room to breath. I sync my iPad and iPhone with my MacBook Pro, which has a 500GB drive. I use the MacBook Pro’s internal drive as a dumping ground for the numerous HD videos and RAW photos I shoot. Every once in a while I transfer things over to an external FireWire drive.

Having 480GB of storage capacity crammed inside a MacBook Air would be a dream come true for many Mac fans, but at $1,580 it’ll be a tough sell. That’s right – the drive is more than most MacBook Airs and many MacBook Pros. If you’re looking to upgrade a smaller SSD, the OWC Mercury Aura Pro Express starts at $479 for 180GB.