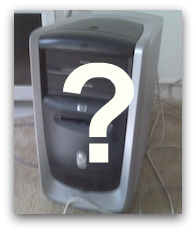 I’ve owned many computers throughout my life, perhaps more than I’d like to admit.  I sat down the other day in an attempt to create the most complete list of computers that I’ve owned since I delved into the tech world.  It all started with a Mac SE that my father would bring home from his school and exploded when I obtained a Packard Bell desktop that featured a K56 Flex modem with dial-up Internet access.  There would be no turning back.

I read somewhere that Sony once had a product life-cycle of 90 days.  That means the products introduced to the market exist for 90 days before they release an upgraded model, and I read that a few years back.  As technology continues to rapidly change and develop, the fact that we now live in a disposable tech society is clearer than ever.  Why pay to have something repaired when you can buy new for less?

Despite owning these machines, I am not a collector of technology.  These computers have either been recycled or found their way to eBay.  In fact, many of these devices were owned for a short time period, played with for a while, and then passed to eBay so that my tech cycle could continue.

I have briefly owned a few of these computers for review purposes here at GottaBeMobile, and believe it or not, I do believe in living simply.  Nearly all of these computers were purchased as refurbished models or through outlets such as eBay.  My motto when it comes to buying tech is never pay full price.

I’m sure our readers have owned many a machine in their day.  Hit up the comments to share your fossil collections.