I’ve mentioned before how the surge of iPad accessories, specifically stands, has left me with mixed feeling. Well, the emotion churn has started up again with news that an ingenious stand called PadPivot has secured more than $100,000 in pledges through Kickstarter – ten times their goal. Time for me to sign up too (perhaps for two). 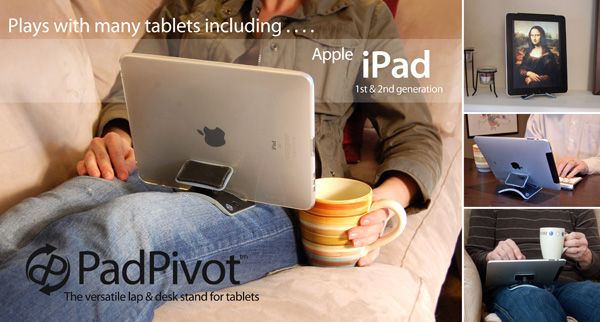 What makes the PadPivot so clever are a ball jointed design that links a grip pad, which holds the tablet in place, with a base that is concave so it can either stand on a tabletop or on a curved surface, like your leg. The joint allows for full rotation for switching between portrait or landscape mode without lifting the device from the stand, hence the “pivot” part of the name. The grip pad can also tilt back to act as a prop for alternate viewing angles.

The inventors signed up with Kickstarter, which raises startup capital through online pledges, to get the project rolling. Their initial goal was to raise $10,000, but they’ve blown right past that with over $100k pledged. Very impressive, and the gadget looks well-deserving of the funding. 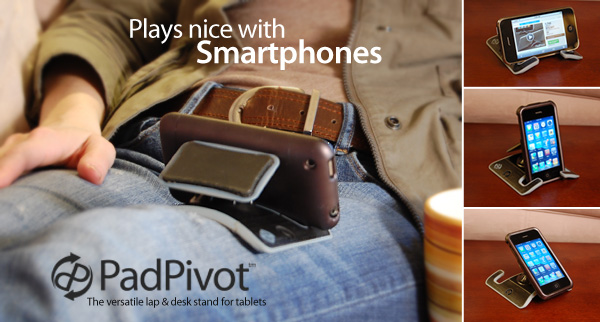 The only thing I don’t like about the whole deal is that it’s come about years after I gave up looking for tablet stands. It’s like when Star Wars Lego came out years after I stopped playing with separate Star Wars and Lego toys (I leave the exact number of years open for speculation). I’m both excited and slightly bummed. However, it’s such a worthwhile project, and I’m pretty sure I’ll be able to use a new stand some time in the future, so I guess I’ll join the crowd of nearly 3,000 backers. Funding round ends March 14th.

Via Gizmodo (via tips emailed by PadPivot backers)