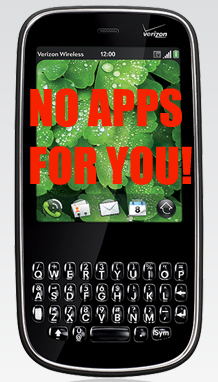 Got a Palm Pixi or Pre through Verizon Wireless? You might want to hold off downloading any new apps for a while as it appears a bug has caused many Pixi and Pre users to lose access to their applications. I noticed the problem this morning as I was trying to install Evernote on my wife’s Pixi. The app downloaded as normal but would not install. After the failed install, access to all other downloaded applications was crippled. I contacted Verizon Wireless customer support and they were able to replicate the problem exactly as I had experienced. The VZW customer service rep transferred me to Palm tech support who took all of my information, said a higher level of technical support was needed, and they would be calling me with a fix in 24 hrs.

It should be noted that my wife’s Palm Pixi is 100% pure stock and all applications had previously been downloaded through Palm’s App Catalog. I tried to reboot, battery pull, and “Erase Apps & Data” under the reset menu, but all of these options failed to resolve the problem. In fact, all of the applications remained on the phone even after the “Erase Apps & Data” option had been executed. Currently, the phone is able to be used with voice, data, and text messaging, but all of the downloaded applications are inoperable.

HP surely isn’t happy that this bug exists and appears to be keeping pretty hush-hush on the matter. Not a good start for the newly acquired Palm.

Here is a link to the forums of PreCentral and other users reporting the same problem.

More information will be posted as it becomes available.  Anyone else experiencing the same problem or are you still all systems go?

Update: Apparently there is a temporary workaround if you change the date to back to April.  This fix remains unconfirmed.

Update 2: I received a phone call today from Palm tech support stating that the issue has officially been resolved. No reason for the problem was provided, but Palm encouraged me to call should I require further assistance.