With the 2013 CES show a steady trend up to this point has been primarily focused on tablets. While there have been a lot of Windows 8 tablets, and assorted Android tablets, the new Panasonic 20″ tablet prototype is in a league of its own with an UltraHD resolution display.

The announced prototype is a 20″ tablet from Panasonic and features a whopping 4K resolution, which is roughly 4 times the resolution of a 1080p full HD display of today. With 4K resolutions just starting to appear on television sets, the idea of such a high resolution appearing on a tablet is absolutely insane. This prototype was shown running Microsoft’s Windows 8 OS.

In comparison the Android tablet with the highest resolution currently is the Nexus 10 with a resolution of 2560 x1600 and the projected screen resolution of the Panasonic 20″ 4K tablet would be 3,840 x 2,160 which is a huge improvement. 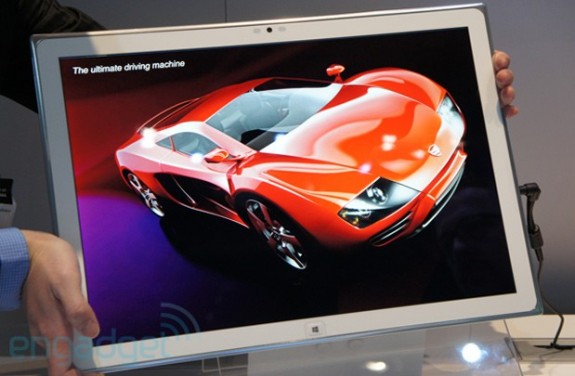 Although this device is still a prototype we know the following about it so far, it runs Windows 8, there is a front facing camera (megapixels unknown), there is an Intel core i5 chip in the device, there are micro-USB and micro-SD ports, Wifi and about a two hour batter life.

For being a 20″ screen at such a high resolution two hours on battery life actually seems fairly decent. Now it is probably safe to say that a 4K tablet is not for the everyday consumer.

The main focused audience of this device is for professionals, those who deal with a lot of video and photos, or other business applications.

A valid point to bring up is that currently there is little to no content that is available in 4K resolution. This will probably change over time when more 4K televisions, and tablets actually come to market. Apps and programs will likely have to be optimized and updated to take advantage of the 4K resolution, and will likely take some time like with Apple’s new Retina Display notebooks.

It will be interesting to see if this model makes it out of prototype but it definitely has gotten a lot of people talking.