The Toughpad 4K UT-MB5 is full of specs to make anyone drool, especially if you’re in the supposedly burgeoning 4K video market. That video standard is supposedly the next big thing in video quality and by big we mean whopping digital video that’s enough to make even the broadband provider with the largest pipes get nervous. But we’re aways from seeing those kind of files on our consumer devices just yet. 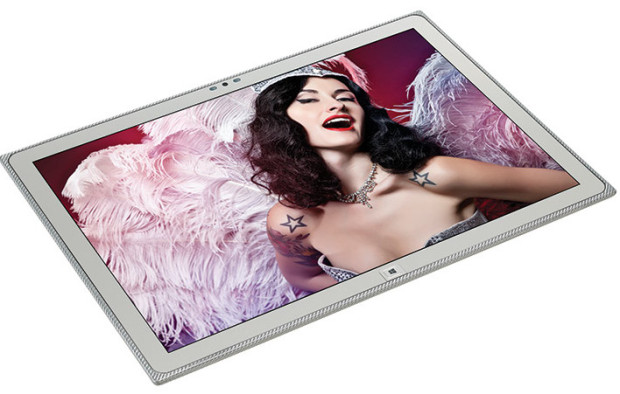 Meanwhile, the world’s first 4K multi-touch Tablet will feature an Intel Core i5 vPro processor, 256GB SSD, 8GB of RAM and 2GB of VRAM. There will be a 720p front-facing camera. Windows 8.1 Pro is the OS for this beast. The 20-inch Alpha IPS 4k LCD will have a screen resolution of 3840 x 2560 and features LED backlighting The display ratio is 15:10. The screen is 10-point capacitive multi-touch with an optional optical pen.

That pen is hailed as:

“a unique new device offering pixel-level precision and a distinctly pen-and-paper-like feel for freehand sketching, annotation or handwriting. The pen uses infrared signals to distinctly read each pixel on the screen and communicates with the tablet via Bluetooth®. For natural and highly accurate drawing or handwriting, the pen can be held from various angles and can interpret more than 2,000 levels of pressure”

Onboard sensors include ambient light, magnetic, gyro and an accelerometer. You can check out more specs here.

This won’t exactly be a mobile solution as it will weigh in at 5.3 lbs in a form factor that measures  18.7”(L) x 13.1”(W) x 0.5”(D). The drop rating for the Tablet says it can survive a a 30-inch drop to its back while operating, and 12-inch drops to 26 angles when nonoperational. I wonder if all the folks who like to drop test Tablets will invest in checking this one out?

Again, this isn’t meant to be a consumer Tablet. It’s designed for businesses that need this next level of high quality display technology. I would imagine it will be shown off at CES 2014 this January given that it made an appearance at CES 2013.