The new rugged Ultra-Mobile PC from Panasonic is raising quite a few eyebrows these days, and rightly so. TrustedReviews.com has very thorough review of this intriguing rugged UMPC, including some up-close pics. As we’ve stated before, the integrated keyboard looks quite small and challenging, but given its intended use, it just might be a winner. I wonder what the impact of this device will be upon MobileDemand’s T8700 and Motion Computing’s F5 and the Getac? 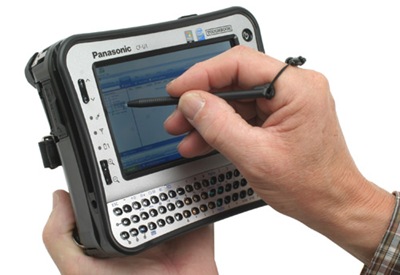 I’ve never been fully convinced of the merit of a UMPC. The problem with the platform has always been that a general purpose PC simply doesn’t work in this form factor. However, Panasonic has taken the right approach, by creating a device that can be targeted at specific tasks, and has the potential to excel in the right environment.

If you’re a field worker that needs a fully rugged machine, but doesn’t need a fully featured notebook, the CF-U1 will make a perfect companion. The Atom platform gives this device a decent amount of grunt, while the dual battery setup makes for impressive operation times. The hot swap battery is the icing on the cake, meaning that you won’t have to shut down in the middle of something important when you run out of juice.

The fully configurable nature also means that you can spec the CF-U1 with exactly what you need to get the job done. Ultimately, if you’ve been put off rolling out fully rugged ToughBooks to your team because of the high cost and heavy, bulky form factor, the CF-U1 is what you’ve been waiting for.

Thanks for the link, Herushan