On an earnings call to investors earlier this week, music streaming service Pandora threw a bone to users, possibly to hang on to as many of them as possible following the launch of Apple’s own subscription music service.

Pandora users will now be able to enjoy as much free music streaming as they want, with the company saying that it’s working to “reset” it’s “levers” in September according to transcripts of the call made available by TechCrunch. Pandora users could only stream up to 40 hours of music per month for free on their mobile devices before Pandora stopped them and suggested they pay for the company’s Pandora One streaming service.

As free users had to listen to ads in between music tracks already, many free users resented the insinuation that they should pay for the service, which costs $36 a year. 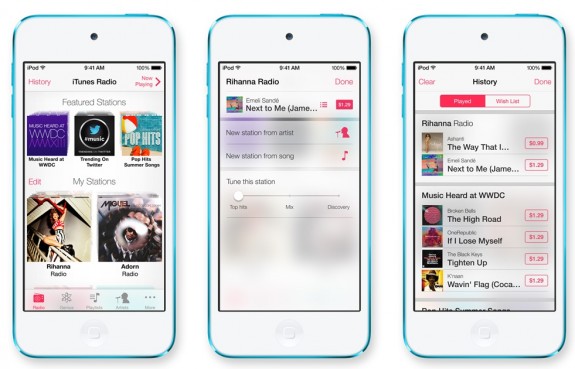 iTunes Radio comes in iOS 7 with streaming stations that are ad-free for $25 a year.

Though most users will rejoice in their new ability to stream music for more than 40 hours a week, Pandora’s timing is curious. Apple could announce release details for its iOS 7 mobile operating system and a new iPhone on September 10th. That operating system, and the update to iTunes that it will require, will give most users their first real opportunity to get a subscription service that is native to their operating system.

That’s because Apple’s iTunes Radio will arrive to all users as a part of iOS 7. Revealed during the company’s World Wide Developers Conference earlier this year, Apple’s iTunes Radio allows users to stream songs for free. Users will also have the option to simply buy the songs. Users won’t be able to replay tracks, though they will be able to skip songs. Any Apple user who already has an iTunes Match subscription will get iTunes Radio for free, and they won’t have to sit through ads either.

During that earnings call Pandora hinted that it would be making other significant changes to its service, however it didn’t share details. Its CEO did share some of his insights on new competitors in the space telling AllThingsD that,

“We’ve now been around for eight years. We’ve seen competitors large and small enter the market and, in some cases, exit the market. I’ve never seen an analysis that identifies an effect from any competitor … we don’t see the picture changing.”