Panic is bringing its popular Mac coding app, Coda to the iPad as Diet Coda.

The newly announced Diet Coda will come to the iOS App Store on March 24, and will offer most of the web coding features of its Mac sibling, Coda, and the new Coda 2.

Diet Coda will let web developers code in HTML, CSS, JavaScript, and PHP to start, with more languages on added later. The app’s special “contextualized keyboard” should make writing and editing code easier by adding a new row of keys to above the top row that changes based on what the user is doing at that moment. It reminds us of a smarter version of the keyboard in iA Writer. 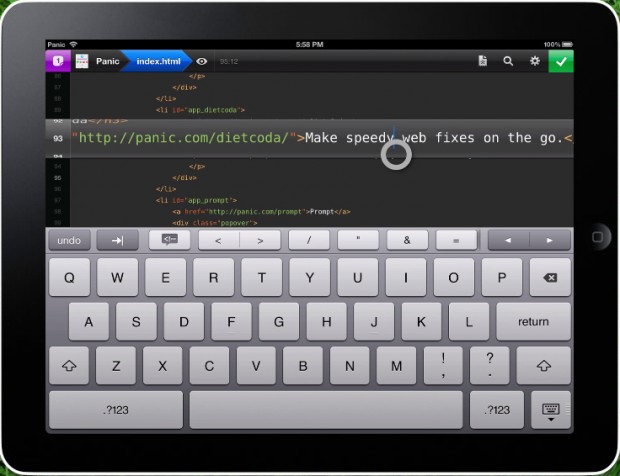 The app also offers what Panic calls “Super Loupe” which it describes as “the best way to move your iOS cursor, ever.” We’re not sure exactly what that means, though we doubt it’s anything like the iOS keyboard/cursor concept video we saw recently.

Panic even built Prompt, its SSH Terminal for iOS into Diet Coda, which saves users $7.99.

With Diet Coda, web developers have a great excuse to travel with only an iPad. Pair it with a keyboard case like the Logitech Ultrathin Keyboard Cover and there is no reason to carry around a bulky laptop. Using a Bluetooth keyboard will lose the contextualized keyboard, but it’s the best option for users who don’t like typing on the iPad’s screen.

Users that want to use a laptop or desktop for web coding can still find a use for Diet Coda. The AirPreview feature of the app turns it into a dedicated preview for the work done in Coda 2. Paired with a MacBook running Coda 2, Diet Coda offers an easy, portable dual-monitor workstation just like Air Display.