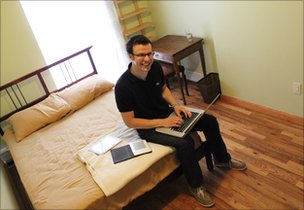 Life can sure feel cluttered sometimes, which is why I’m on a quest to go paperless. There used to be a lot of paper around my home office, but I’ve been scanning and shredding like a mad man this summer. But some people are going a leap further and getting rid of just about all of their possessions. I read an interesting article last night on the subject over at BBC.co.uk and realized I knew the subject of the article.

Kelly Sutton, a software engineer I’ve met several times at various geek events due to his site, Hackcollege.com.  At one event or another I suggested that he check out Blip.tv and one thing led to another and he landed an internship there. He landed a fulltime job at the company and moved permanently from southern California to New York. Apartments in New York are notoriously small and Kelly took the opportunity to simplify his life. Big time. There are probably Buddhist monks with more possessions than the Kelly.

On CultOfLess.com, Kelly’s listed every possession he owns and whether he’s selling or keeping it.  I take more stuff with me on a weekend trip than Kelly owns. But just because Kelly doesn’t have a lot of possessions doesn’t mean the guy’s ditched the stuff that matters. He’s digitized as much of his stuff as possible. The rest of his possessions just cost too much time. At CultOfLess.com he wrote:

I’ve found that more stuff equates to more stress. Each thing I own came with a small expectation of responsibility. I look into my closet and feel guilt. I glance into my desk drawers and see my neglect. When was the last time I wore this? Have I ever even used that?

Instead of trying to distribute my time too thin among all of my possessions, I will simply get rid of most of them. I will eliminate a large part of stress in my life and I will truly cherish the few things that I own.

I completely agree with Kelly that some possessions can cause stress by draining time. For example, my wife and I had three cars when we got married a few years ago. I quickly tired of shuffling them around to avoid sweep sweeper fines, bringing them in for maintenance, cleaning them and of course spending money on them.

Kelly’s held onto his MacBook Pro, Kindle and iPad. He’s also hanging onto a backup drive and a few changes of clothes.

Kelly does rent an apartment, but some people are going with even less, opting to live on friends’ couches and not have a permanent address. How much stuff is cluttering up your life?