A few years ago Parrot announced its first AR Drone controlled by the iPhone at CES, but this year they’re showing just how far the technology has come. Showing off two new smartphone controlled robots that are set to hit shelves later this year.

Remote or smartphone controlled drones (mini robots) are always fun, but they usually aren’t cheap, and even last years Parrot AR Drone 2.0 is $299, but this year they have something else in mind. At the Consumer Electronics Show Parrot announced and is showing demos of two new drones that are much smaller, easier to control, and should come at a much more wallet-friendly price. 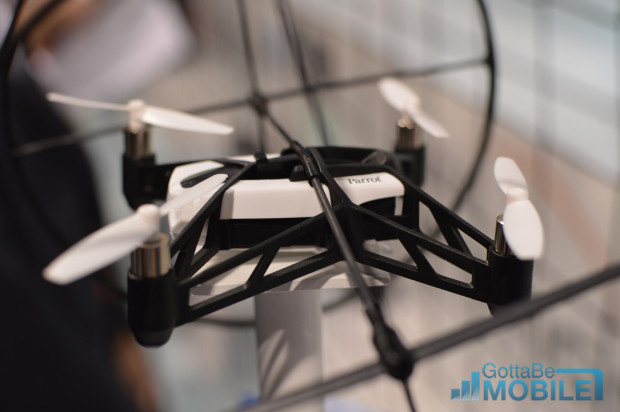 Starting with the Parrot MiniDrone they’ve finally managed to pack the same quadricopter robot into a much smaller form factor, not to mention make it easier to control, cheaper, and more durable. However, as a result of a lower price you won’t have a 720p camera on the front to record flight like the AR Drone 2.0 from last year, but it still has plenty going for it.

This little robot is small enough to fit in your palm, yet packs tons of power and will be flying around the house with ease. Then, they’ve added an option for wheels, if you will, to the sides letting you fly it up walls, around the ceiling, and more, instead of just hitting a wall and crashing as before. It’s an ideal solution, and should make it easier for daily use. 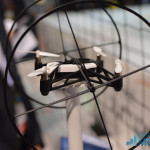 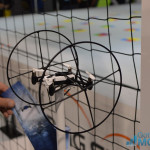 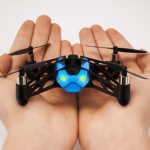 An uncontrollable bottom-mounted camera keeps it steady and upright, and also makes controls quite simple with an iPhone or Android device. There’s controls for the height and pitch while flying, and the built-in accelerometer in your smartphone can make it change directions. It’s actually really easy, and if you ever lose control just let go and it auto balances and will recover for you, making it great for kids. 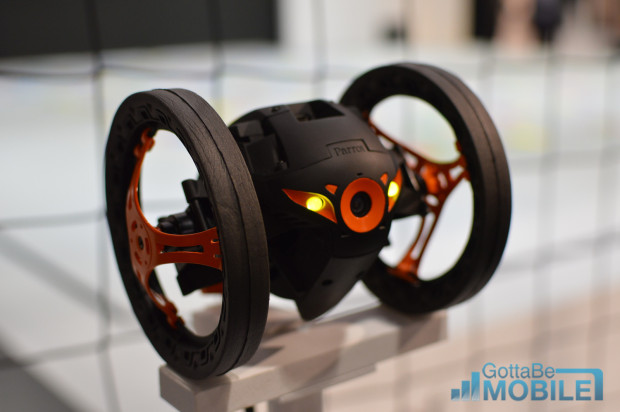 The second drone is more of a robot car blend, called the Jumping Sumo, which replaces the four propellers with two large wheels and will roll around the house or down long hallways. The Jumping Sumo actually is quite fast, turns on a dime, and has a front-facing camera to give you a live video feed of what it sees. As you drive around with your Bluetooth connected device, everything is shown on your Android or iOS device display.

A quick down swipe and it turn 180 degrees on a dime and starts heading the other direction, which was actually quite impressive. Then, as the name implies, there’s a spring-loaded servo that will let the Sumo jump almost three feet with the tap of a button, and that isn’t just talk, it does it. Nearly jumping into trashcans on the showroom floor you’ll be able to jump over pets as you roll around the house. It’s more fun that I originally though, and something that should be a bit hit if priced right. 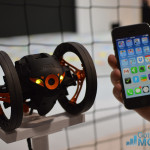 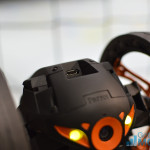 The MiniDrone sadly only has about 7-8 minutes of flight time, but the Jumping Sumo can go for a little over 20 minutes on a single charge, which should be enough for those quick moments of entertainment.

Pricing and availabity has yet to be determined, but expect them to be available soon at a price much lower than the $299 AR Drone 2.0 quadricopter.