While testing various scenarios with Ink and Touch on the CL900 I am reviewing I found several significant issues with the reliability and consistency of Ink on this tablet.  I reached out to Rob Bushway to discuss his experiences with this device and the digital pen.  He told me he was not experiencing any problems with Ink whatsoever, and in fact the CL900 was turning him into an N-trig believer.  I documented the issues and discussed them with Motion.  After a few questions, they quickly agreed that there is a hardware problem with the digitizer, and are sending out a replacement unit so I may complete my review and analysis.

Because Ink is a significant part of the user experience on this device, I’m deferring the usability review until I have a couple of days with the replacement.  In short, what would have been Part 3 now becomes Part 1.5.  Let’s talk about performance.

(UPDATE: I received the replacement CL900, and am in the process of installing the tools I need to finish the usability and user experience portion of the review.  Look for that coming in the next few days.)

We need to keep in mind the intent of this mobile computing device.  The CL900 was created as a light weight device, with long battery life, and ample performance for appropriate tasks.  This is not a desktop replacement, but a powerful companion device that should support us through an entire day without worry.  This means email, documents, notes, but not necessarily heavy-duty analytics, graphics, or development.  With that context in mind, is the Motion Computing C-900 up to the task?BatteryEach day I’ve had the CL900 I charged it on the docking station overnight, lifted it from that dock in the morning, and never plugged in again throughout the day.  This means the CL-900 was never plugged in from about 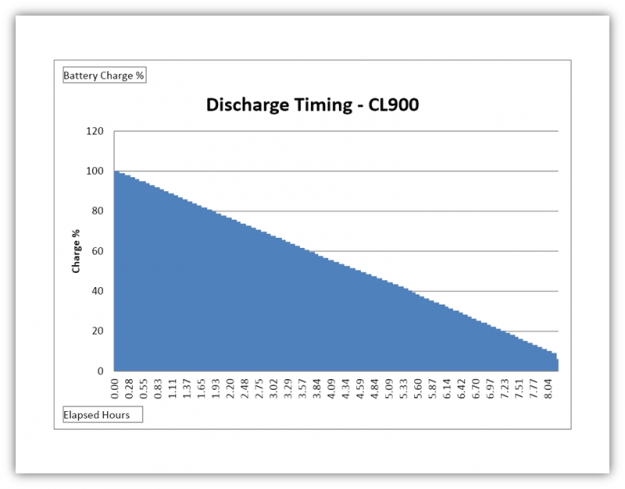 5:00am until 6:00pm.  Additionally, I disabled sleep mode, but left the display set to turn off after 10 minutes of inactivity.  During the days my tablet goes with me to meetings, and provides a secondary view of email and other information when I’m either not near my primary desktop or it happens to be otherwise busy.  Roughly estimated the tablet is actively used three to four hours a day, and sitting idle (but notin sleep mode) the rest of the day.  In this scenario, the slate had 10 – 20% battery left at the end of the day.I then used ‘Battery Eater,’ an application that used OpenGL rendering to put load on a portable device while tracking battery discharge.  It is a reasonable representation of light to medium use of a device, similar to the anecdotal test above.  I disconnected the CL900 from A/C power in the morning, and left the test running, interacting very casually with the device throughout the day.  I terminated the test at 4:10 pm, 8 1/4 hours later.  The CL900 still had 6.1% battery charge.  The very linear drop off seen in the graph to the right is indicative of the consistent load provided by OpenGL rendering.  Once I have the replacement unit in hand, I will run and idle discharge graph, and a heavy use discharge graph.The battery life in the CL-900 matches its advertising.  This is a full day device, presuming it isn’t being used for watching eight hours of video.  If left with a typical power scheme, where 10 or 15 minutes of idle puts the slate to sleep, you will have computing power throughout the entire work or travel day with a CL900.Graphics

Graphics processing power is one of the trade-offs that is a bit frustrating in the CL900.  High end video eats battery life.  This slate’s goal is to give you full day computing while mobile, and it delivers on that promise.  How much users are impacted by the video sub-system selected depends on each use case.  The background:

The end-user experience arrives at the same conclusion.  For most activities, graphic processing is fine and doesn’t interfere.  However, in a few cases such as scrolling a graphic intensive web page the CL900 will stutter a bit, and not provide a smooth experience.  It’s important to understand the impact of these power / performance trade-offs when putting mobile devices in context.

The CL900 is equipped with the Intel© Atom™ Z670 CPU (Peak Processing Performance of 3 GFLOPS).  Running at 1.5 GHz, this CPU has a single core, and supports two threads per core (hyperthreading).  It has 24kb of synchronous, write-through, 6-way integrated data cache, and 512kb of L2 on board 8 way ATC cache.  (Cache memory is shared between the two threads.)  This is a 32 bit processor supporting one channel of DDR2-800 RAM (maximum of 2 GB).  It does not support any Intel® virtualization technologies.

Since processors are all about metrics, I ran a series of benchmarks:

In the real world what all these numbers mean is this isn’t a lightening fast, done before you finish clicking piece of hardware.  However, in practice the processor performance is perfectly acceptable.  Running Outlook, OneNote, and Word I seldom saw utilization numbers peaking over 45%.  Occasionally the UI would feel a bit sluggish, but those events tended to be short-lived.  Through four days of using this as my primary portable device I never felt constrained by the processing power.

The experience of performance is never a single factor, but a combination of all the sub-systems.  Making the correct decisions when designing a system can mean selecting for power in once case, and performance in another.  Some of the lack of performance within the video and CPU is made up for by:

Choosing an SSD for storage in tablets is a necessity.  From power, performance, and size standpoints the SSD is dramatically superior to hard disks.  The trade-off today is cost and storage space, as SSDs are still more expensive per GB by a significant amount.  The payoff is clear.  The Toshiba THNSNB062GMCJ in the CL-900 is a 62GB drive with a SATA 300 interface.  Average benchmark tests put it at 138 MB/s, with 638µs random seek times.  This give the drive a 5.9 Windows Experience Index.  Various other read / write benchmarks show similar performance (tests run with a 424 MB file):

The non-buffered write tests show considerably lower scores because write verify is turned on by default on this interface.  Once I have the new unit in hand I will disable and re-test.

In short, the IO performance to the disk sub-system goes a long way to bring the overall performance experience up.  This will be discussed in-depth in the next post about usability, including boot and shutdown timings.

Memory performance in the CL900 is quite good.  Aggregate memory performance is 1.5 GB/s, providing a Windows Experience Index of 4.2.  The memory bus runs two channels at 400 MHz, for a maximum theoretical memory bandwidth of 4.69 GB/s.  Memory latency was tested at 280.0 ns on both threads of the CPU for random access.

Performance is somewhat limited by the chipset not allowing large memory pages, and the benchmarks show low-bandwidth efficiency.  I will investigate if this is caused by configuration / timing issues.  The real-world numbers are quite good, and contribute to the overall performance of the CL900.

I will discuss the usability side of performance in the next post.  In summary, I have no qualms with the performance of the CL900 when taken in context.  It kept up, and the brief pauses where not an irritant.  Yes, if it had a Core I5 and high-end mobile graphics it would be faster; but slates with specifications at that level run an average of 3 – 4 hours per charge.

The underlying specifications of the CL900 tell the story of a device designed to provide full-day mobile computing, which is Motion’s intent with this device.  The trade-offs made in design, specifications, and ultimately performance all focus on this goal, providing real balance to the overall unit.

The most difficult of these considerations is certainly the video, eschewing power-hungry high-performance GPUs for a perfectly adequate but a bit under-powered video sub-system.  From the WEI scores, you would expect me to be complaining about the CPU, but in practice I seldom saw utilization numbers peak over 45%.  The majority of the time a user works with the CL900 they will not notice either limitation.  Once in a while when scrolling a graphic-heavy web site or document and the screen stutters a bit, just remember you unplugged the CL900 six hours ago, and have plenty of battery left.