It didn’t take long for sports and entertainment apps to deliver support for PassBook in iOS 6.

After hearing that airlines and amusement parks would be among the first to support PassBook it’s nice to see other companies adding app support quickly.

One day after the iOS 6 update arrived on millions of iPhones four MLB teams announced support for the PassBook app.

Read: How to Use PassBook in iOS 6 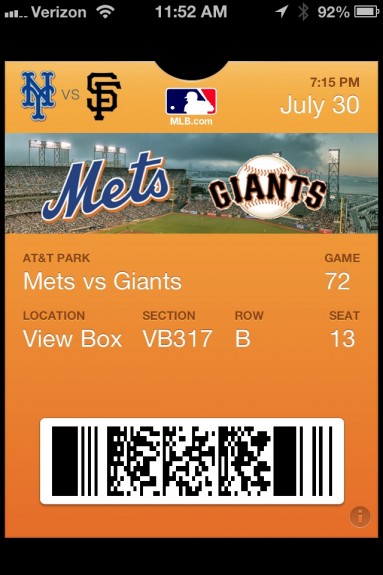 One cool feature with the PassBook digital MLB ticket is that the ticket will show up as a notification on the iPhone lock screen on game day, though I’ve yet to meet a Giants fan that forgets they have tickets.

MLB fans who buy tickets through MLB.com, club websites or the MLB.com At Bat and At the Park apps can add PassBook tickets to PassBook on iPhones with iOS 6.

StubHub also supports tickets in PassBook, but so far only supports two clients, The University of Texas and Purdue University. The new StubHub app is PassBook enabled, and will offer user the option to add tickets to PassBook if the tickets ar for a PassBook ready venue.

There is no word from the NFL on when the organization will support NFL PassBook tickets on the iPhone. Based on the current NFL referee lockout, it’s probably not at the front of League official’s minds.

PassBook is a new digital wallet app from Apple that arrives as a free app with the iOS 6 update. PassBook collects tickets, loyalty cards, gift cards, coupons and more into a central location.

The app can alert users to changes in a gift card’s balance, and it can pop up on the lock screen to notify users that an event is coming up later in the day.

Users can create their own PassBook passes for some stores, while waiting for the list of supported apps to grow. Users that cannot use the PassBook app can fix the cannot connect to iTunes error with these instructions.

For more iOS 6 features, check out how to use panorama mode on the iPhone and how to use Do Not Disturb mode for silence.