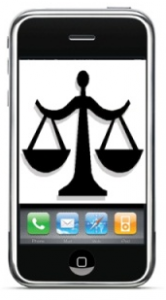 Apple is hitting hard at Samsung over patent disputes trying to keep them from bringing smartphones and Tablets into the US because of similarities. The International Trade Commission (ITC) agrees with a couple of the points in Apple’s complaint. Some software developers say that they may abandon Apple and Android because of the high cost of possibly defending themselves if lawsuits are brought because of the Loadsys filings. Google hits back at Apple with some comments from Eric Schmidt. Everyone goes crazy, and the lawyers celebrate big pay days ahead.

In my view there are two underlying issues here. It’s a given that the legal system surrounding patents is broken. (Much like trademarks, copyrights, etc..) The fact that something called a patent troll can actually exist is the best evidence of this. There’s a business climate that allows this to exist and as long as it does (meaning as long as folks can make money off it) it will continue. Secondly, it is also fairly obvious that companies playing in the mobile tech world are staring at an immediate future where it is tough to innovate. Not just because of patents that others may hold, but also, you know a phone is a phone and a Tablet is a Tablet.

What does that mean? Well, simply put, while there is technology involved, our expectations are basically the same regardless of the device. We expect Tablets to be touch friendly with easy access to Apps. We expect phones to allow us to make calls by touching or clicking on a link. We expect a lot from these devices and that makes it difficult for companies to push the innovation envelope that may change the game. Push past what is expected and you run a risk with consumers. Stick with what those perceived expectations are and you either have to license what others have protected via patents, or run the risk that you’ll get sued.

This is all compounded because of the relative infancy of the market. It is also compounded by the fact that using these accepted legal proceedings is just another tool in the competitive battles that we’re looking at. Apple to most seems greedy, but they are just taking advantage of a system that allows them to do so. Keep in mind, once a shot is fired over the bow regarding infringement, it makes future decision making all that more difficult. And of course that’s the name of the game.

The legal actions will take some time to figure out, there will be an outcome, and most likely some sort of settlement. But the shadows cast by instituting the legal actions are already having their effect in meetings and planning that we aren’t hearing about just yet.