South by Southwest isn’t just the place to launch apps for over-connected adults, but apparently for the children of said adults (who are probably uber-connected as well). PBS Kids unveiled two new games for iOS at the festival: Dinosaur Train Camera Catch! For iPhone and All Aboard the Dinosaur Train! For iPad. Just in time for the Retina Display goodness, right?

As with PBS Kids’ other popular apps, these new games tie into a PBS TV show. They’re designed to be as much fun as they are educational, which PBS tends to do pretty well.

In Camera Catch the goal is to snap pictures of the dinosaurs that match a pattern, thereby teaching recognition skills plus hand-eye coordination. All Aboard the Dinosaur Train emphasizes problem-solving skills and math, tasking kids to choose which train car the dinosaurs should go in based on size and capacity. 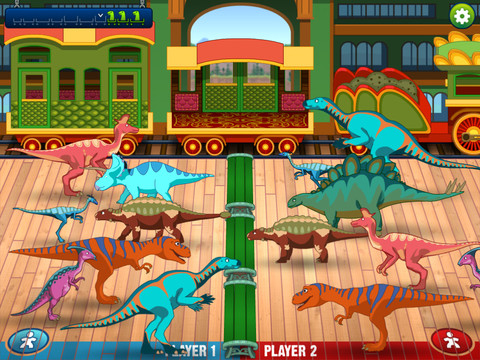 The Dinosaur Train show is aimed at kids preschool age and up, as are these apps. So you might consider getting a kid-friendly case for your devices before handing it off to them.

(Related: Protect Your iPad and iPhone From Your Baby With Apptivity Cases From Fisher-Price)

If your child is a huge Dinosaur train fan, you should also check out Dinosaur Train Eggspress,a matching game that also teaches science and botanical concepts.