PC magazine has a nice review of the Toshiba M400 up, plus a real life test done by Michael J. Miller.

As you can see from this Snagit screen grab below, they like the machine, giving it a “Very Good” rating.

Michael J. Miller (Forward Thinking) has been through a number of Tablet PC’s, and is generally known to be a pretty experienced Tablet PC user. Here are some of his comments from the full story: 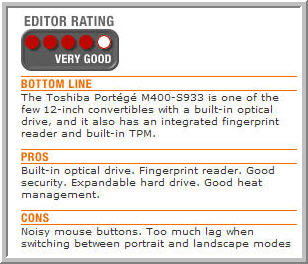 “The Toshiba M400 has a number of pros and cons. It comes with a nice selection of tablet software, some full versions and some trials. Like The Thinkpad x41 (and unlike the Fujitsu), it has an integrated fingerprint reader, which is a very nice convenience feature. And I found Toshiba’s fingerprint software easier to configure and use than Lenovo’s, so I could be in tablet mode and still login to a lot of web sites by just swiping my finger. It has a TPM module, and a “My Safe” application for storing encrypted files, and a hardware switch for turning on and off the wireless radio, which I really like. And it has a slot for reading SD, XD, and Memory Stick cards. On the other hand, most tablets have a little scroll pad or rocker on the side of the screen that you use when you are in tablet mode to page up and down through documents. The M400 is no exception, but it ends up on the lower right hand corner in tablet mode, as opposed to the top right hand corner, which I found more awkward.

There’s a lot to like about the M400 – at 4.7 pounds, it’s about the same weight as Toshiba’s older M205, which didn’t have an optical drive. And it has very nice software and just feels good to use. For carrying back and forth, I’d still give the nod to the X41 tablet, which at 3.5 pounds does feel significantly lighter. But the M400 is very nice – and it offers the Core Duo possibility and that optical drive, which is very convenient”.

For so long, we have suffered through criticism of pretty much any Tablet PC that has come along. It is nice to see the tide turn.