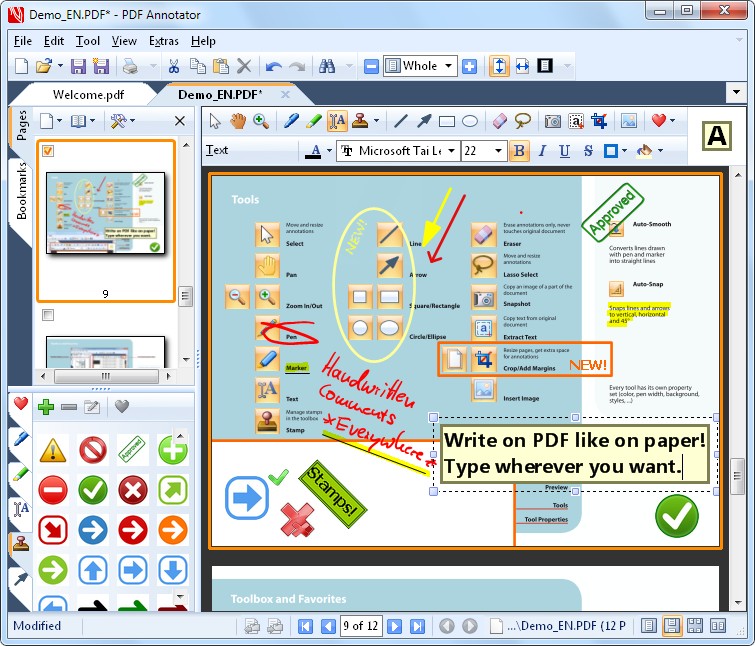 Get ready to kiss Adobe Acrobat good-bye because PDF Annotator 3 is now available and it is packed with so much new functionality it’ll leave you saying “Acrobat who?”

I had the opportunity to beta test the software and, as someone who uses Adobe Acrobat every day at work, I was highly impressed by it. The new version features a tabbed interface to more easily work with multiple documents. The tabs are configurable within the main window and also accessible through the Windows 7 taskbar. The workspace becomes even more manageable with large icons, multi-touch zoom, and a new toolbar that puts the editing tools closer to the action. But if you want to put all the other tools aside and get down to inking, toggling to fullscreen view does the trick.

Of course, the stars of the new release are all the new annotation tools. Instead of sloppy scribblings, you can now opt for clean straight edges with line, arrow, rectangle and ellipse tools with several line styles, fill options, 45° snap, and create-your-own customization. Also offered is the ability to rotate and flip annotations.

Another new feature which is critical for me is the ability to print to PDF Annotator. So not only can you markup PDFs, but you can turn any other document you can open into a PDF for markup. What I like best about the implementation is that it sends the document straight to PDF Annotator first, then lets me work with it before saving.

Two features I could not test are the multi-touch zoom and rotate gestures. There are also page/margin cropping and text extraction. Ran into some trouble with the latter, but the point of testing is to find these bugs. Should be fixed now. The tabbed interface also leaves me wishing I could simply drag and drop pages between different documents instead of going the insert/append route.

Overall, I have to say PA3 felt much smoother than previous versions I’d used. I didn’t have time to get into all the levels of customization that are available, but there is tremendous potential here. I am confident I could streamline my regular PDF editing tasks measurably compared to Acrobat once I get into it, with or without pen input. (BTW, custom stamps are so much easier to make and use than in Acrobat.)

PDF Annotator 3 is available for purchase now for $69.95. Discounts for upgrades, educational licenses, and multiple licenses are available.