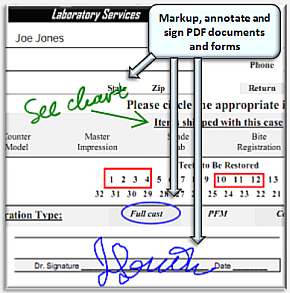 I edit, annotate, and markup PDFs every day at work. I use ritePen macros to shortcut my way through my home computing. Thus, I eagerly jumped at the chance to review PDF PenSuite Pro, a bundle of PDF creation program Foxit Phantom and handwriting superstar ritePen, launching today. Two of my major computing needs met with one package? How could I resist? But two tools that work great separately won’t necessarily work well together. Would they be peanut butter and jelly, or pizza and ice cream? I aimed to find out.

First, I think my adoration of ritePen is sufficiently documented. The version in the bundle is the current one with all the pen macro and screen markup advancements. I love that part of it. â€˜Nuff said. The other part, Foxit Phantom, is new to me, but the functionality matches most of what I do with Acrobat. The commenting and annotating features are quite robust. It’s missing some of the more advanced stuff I use infrequently, like text touchup, but I’d say it’s more than adequate for commenting and markup, particularly at half the price of Acrobat Standard, $149 vs. $299. One major quibble: there doesn’t seem to be an undo function (and I use that a lot).

So how do these two play together? In limited ways so far. The gist of the interaction is to create and complete forms via pen input, such as on a Tablet PC. Per the manual: 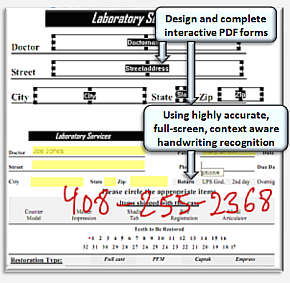 Basically, using its binding feature, ritePen can be told what sort of data goes into a field in a PDF form, which can be extremely useful. For example, by binding a numeric text field, a vertical line will always be translated into a 1 rather than a lowercase “l” or uppercase “I”, solving that persistent problem of handwriting recognition. It also allows for easy entry of a formatted numeric string, such as a phone number or SSN, into a text field rather than splitting those numbers into separate entry boxes. The binding happens in form creation with the results appearing when the form is filled. This feature is aimed solidly at vertical markets, like health care and customer service, but if you want easy-to-fill PDF text field forms on a Tablet PC, PDF PenSuite is built for that job.

One drawback is the binding isn’t portable. It remains in ritePen, not the form. Not a problem if you’re using a specific Tablet PC for form completion, but if you’re using multiple PCs, each one will need its binding configured.

Also, forms can be filled in PDF readers, like Adobe Reader, but can’t be saved without an editor (like Phantom) except by printing to a file. This can actually be a positive because it can protect the original form from accidental overwrites. Depends on how you operate.

The second integration aspect involves telling ritePen when to turn off. ritePen is great for turning handwriting into text when filling a form, but it can get in the way when you’re trying to markup or construct a form. Fortunately, in PenSuite, it turns off when you do either. Simple but convenient. 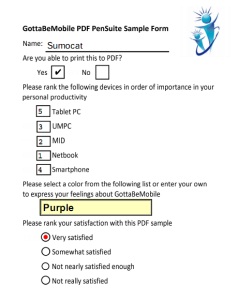 I’d been experimenting with adding form fields to various documents I use, and went so far as to build a simple one from scratch. Javascript can be incorporated into the fields, allowing for truly advanced interactivity. I didn’t have the time or know-how to crack into that, but this simple form was easy to toss together, although placing each field is a bit of a chore. Snap-to guidelines or a grid would be nice.

So peanut butter and jelly? No, but it’s a step in the right direction. I can see more integration in the future, such as adding ritePen’s handwriting recognition to Foxit’s OCR capability and custom macros to streamline form creation.

I’m also hoping the team-up will lead to more pen-friendliness in Foxit Phantom. It’s clear that Phantom wasn’t designed with the Tablet PC in mind (nor is its major competitor). The pencil tool lacks pressure sensitivity and doesn’t quite keep up with the pen tip. It can be used for signatures, but not very well. Also, a bug in the test version causes the Tablet Input Panel to pop up when the pen is used in a text field, not the icon to launch the TIP, the full TIP. Fortunately, the problem is already being addressed and will be fixed in an update.

Ultimately, I have to say I really like the components that make up PDF PenSuite Pro and really wanted to like the package. If you want ritePen and a robust PDF editing tool, this deal can’t be beat. Half the price of Acrobat Standard with most of the functionality plus ritePen. However, there isn’t enough interaction and integration to exceed the sum of those parts. The bundle is headed in the right direction but if you want a killer pen input PDF tool, this isn’t itâ€¦ yet.