The Pebble Team announced it will begin shipping the first Pebble smartwatches today, but only 500 will ship today and iPhone users will have to wait for the Pebble app to arrive on their phone.

While the production line is currently producing between 800 and 1000 Pebble watches everyday, the team’s fulfillment center only have 500 to ship out at first because other were held up by documentation at the airport. The team said it will start shipping the 500 smart watches this afternoon, and set up a website so anyone can see if the watch is shipping yet.

The first shipment includes 500 black Pebble smart watches because black was popular color among those who backed the Kickstarter campaign. That doesn’t mean the team will fulfill every black order first, however. The team just wasn’t able to mass produce different colors at the same time. 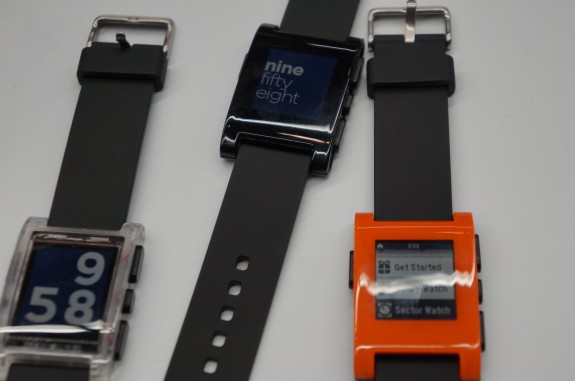 The Pebble Team is trying to get its production line up to full capacity of 2400 watches per day. At CES the team said it plans to produce 15000 watches per week. After production the watches will ship to fulfillment centers in the U.S. and Hong Kong one or twice a week via air freight.

The Android app for the Pebble smart watch will go live in the Google Play Store tomorrow, January 24. The iPhone app won’t make it to the App Store tomorrow, however. The team submitted the app for review two weeks ago, and is responding to Apple’s reviewer feedback.

Without the iPhone app Pebble users can use the watch to receive notifications and control music. Users can’t change the watch face on the Pebble or update the watch’s OS without the app, however.

The Pebble team plans to release updates to the Pebble OS every two to three weeks, so the app is important for iPhone users looking to keep their smart watch up to date.