Many were wondering why Samsung had opted to use its HD Super AMOLED display, rather than an HD variant of the Super AMOLED Plus technology, on the company’s flagship Galaxy S III flagship smartphone, and Samsung answered that question by saying that the lifespan of the device will be increased as the screen won’t deteriorate as quickly. With smartphones, there will always be compromises to be made, and Samsung opted to compromise a little to make your investment last a little longer. 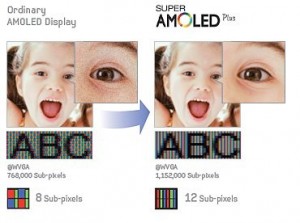 Given that the 4.8-inch display packs in a resolution of 1280 X 720 (720p) HD screen, many who were lucky enough to lay eyes on the Galaxy S III said that they didn’t feel that the display was lacking given that there was already so many pixels. However, as Super AMOLED uses a PenTile sub pixel arrangement whereas the Super AMOLED Plus variety uses a more traditional sub pixel layout, the HD Super AMOLED Plus would be crisper than the AMOLED without the ‘Plus’ moniker.

The difference with PenTile and non-PenTile displays is such, as reported by Mobileburn:

Samsung’s Philip Berne explained to me that the blue subpixels on AMOLED displays actually degrade the fastest – quicker than the red or green subpixels. With a PenTile layout, the subpixels are arranged RGBG (red, green, blue, green), so they feature more green subpixels and fewer red or blue subpixels than an RGB stripe layout with the same resolution. Because of this, AMOLED displays that have the PenTile layout tend to have a longer lifespan than those with RGB layouts. Since Samsung is selling its phones to users that usually keep them for 18 months or longer, it has to be sure that the display will still offer peak performance at that time. According to the company, PenTile AMOLED displays have proven to be more reliable than those with RGB layouts.