Today Evernote released Penultimate 4, the new version of the popular note-taking iPad app, and made the app free for new users.

The new version of Penultimate improves the inking capabilities of the app, and adds a number of new features. Evernote says that inking in the new version is smoother and sharper than previous versions of the app. The app also has a refreshed UI, making the app interface cleaner with less clutter.

Penultimate also includes optional Evernote integration as the company bought the app’s developer last year. Users don’t have to sign up for or log into Evernote to use the app, but if they do sign up for Evernote they’ll have the option to sync all existing Penultimate notebooks to the service. Large notebooks may not sync at first, but the app will help users break those notebooks down into pieces that can sync. 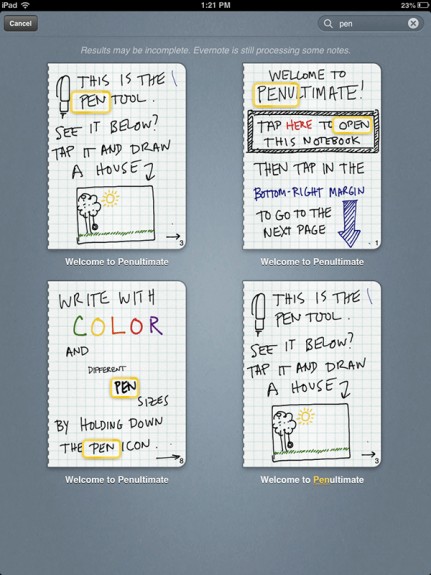 Evernote integration brings with it a powerful new search tool. Now users can search their handwritten notes by just typing words they wrote  in the search box. The app will use Evernote’s word-recognition technology to find where the search terms appear in handwritten notes. The feature should make it easier to find specific notes without digging through virtual notebooks.

Evernote also added more sharing options to Penultimate, giving it sharing features similar to the Evernote app. Users can email their notes to friends and co-workers, save images of notes to the camera roll on their iPad, send entire notebooks over email or share a public URL to the note using Evernote.

Find Penultimate in the App Store.