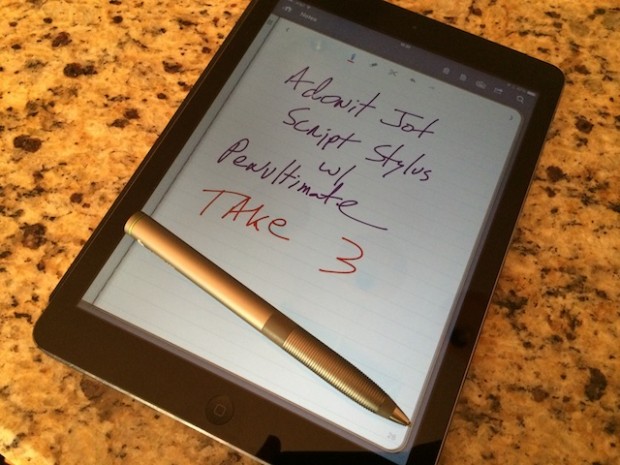 Initially I was not impressed with the new, and expensive, stylus.

But it turns out I got a lemon. I received a replacement and things worked much better as I mentioned in this follow up review.

Now Evernote has rolled out a new update for Penultimate aimed at improving the Adonit Jot Script Stylus experience with its own App. I’m happy to say that the new update seems to have solved the few hiccups that were remaining in using the stylus with Penultimate. In testing I haven’t seen one glitch in the wrist protection scheme, nor have I experienced any skips when Inking very fast. That’s typically how I take notes with a stylus, so that’s a good thing in my case.

So, kudos to the Penultimate team for continuing to hammer away at this in order to create a good Digital Inking experience. Obviously there is a considerable investment in making things work well, given the cost of the product. That investment seems to be paying off.

The new version number of Penultimate is 5.0.2. The App is free and can be obtained via The App Store. The Adonit Jot Script Stylus can be obtained through Adonit, or on the Evernote Marketplace. It costs $74.99.