The words graffiti and app don’t usually find themselves int he same sentence unless you’re talking about old school Palm Pilots or the Android app that brings the handwriting recognition engine to modern smartphones. However, researchers at Purdue University see graffiti a little differently and have created an app to help law enforcement understand it better, which may help stop crimes.

When it’s not a form of legitimate street art, graffiti is often used by inner city gangs to communicate messages, mark territory, and issue warnings or challenges to rival gangs. Being able to interpret these messages could give police a heads up before the escalation of violence. That’s where Purdue’s mobile app comes in. 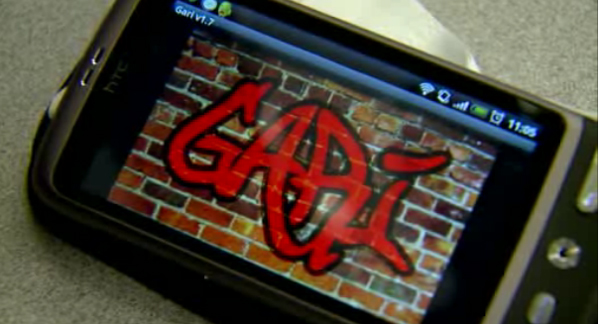 Police can use GARI (Gang Graffiti Automatic Recognition and Interpretation) to take pictures of graffiti they find, which is then analyzed and compared to the other images in the database. The app can connect to the cloud to pull down this data and that geodata is also included. Police can compare the graffiti to similar tags in the area, thus aiding interpretation, and access all previously taken images from the database based on search criteria.

The phone in use in the news report below is Android, most likely because it’s easy to sideload and test apps on that platform. But perhaps when it’s ready for wider deployment there will be an iPhone version, too.

GARI is still in beta phase (the first showcase was on the 18th) and not widely deployed yet. But the Department of Homeland Security, one of the projects backers, is helping the university bring the technology to the Indianapolis police department. It will be interesting to see how much data they can glean from the graffiti on future activities and whether a gang’s group personality can be interpreted as easily as their messages.