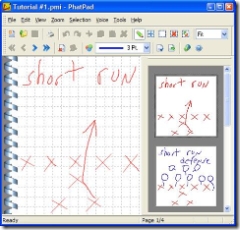 I have not used PhatWare’s PhatPad much on my Tablet PC, although we have been taking a look at PhatWare’s PenCommander 2.0 recently. Look for an InkShow from Matt on that sometime today or tomorrow. We’ll try to get Matt to take a look at PhatPad in another InkShow for March or April.

Meanwhile, take a look at PhatWare’s just released PhatPad 4.1, with their added mobile device support and streamlined footprint. It is available for $59.92

PhatWare Corporation, a leading provider of software products and professional services for mobile and desktop computers, announces the release of PhatPad 4.1, the next generation of the company’s award-winning notes organizer for Microsoft Windows-based Tablet, Desktop and Windows Mobile powered Pocket PCs.

PhatPad allows users to draw pictures, jot notes or put a mixture of pictures and typed text on a virtual scratch pad. The program uses new digital ink technology, which provides a very smooth ink flow, so it feels like writing on an actual piece of paper. While working with the note editor, PhatPad offers standard editing commands in addition to a customizable pen palette and variable pen width.

To address customer’s needs and requests, the upgraded software now includes PhatPad viewer, which allows users to view PhatPad files for the first time on their Microsoft Windows Mobile-based Smartphones. The PhatPad viewer is included with the application and can also be downloaded separately from PhatWare’s Web site for free. The PhatPad viewer is also available for Pocket PCs, which allows PhatPad users to share their documents and drawings with Pocket PC and smartphone users who do not have PhatPad.

PhatPad 4.1 offers improved performance and installation experience on Microsoft Windows Vista computers. The new Multipage Undo action stores data for each page that is necessary to undo the users last editing actions, while saving information as the user changes pages.

Additionally, the application’s footprint on Tablet and Pocket PCs has been reduced by 10 percent compared to the previous version. “PhatWare is thrilled about the continuous improvements that are being made to PhatPad based on the professional and consumer feedback,” said PhatWare president Stan Miasnikov. “Our goal is to provide our customers with the best.”