More than a year after its Japanese release and months earlier than expected in the U.S. Capcom announced that Phoenix Wright: Ace Attorney Trilogy HD will come to U.S. App Store for iPhone and iPad next week, on May 30.

The new Phoenix Wright game includes all three of the Nintendo DS Ace Attorney game. As the name implies, all three games are for the iPhone and iPad, which means they look better than they did on the DS. Characters that were once pixellated now look like they come right out of a cartoon and the locations look much more detailed.

Ace Attorney follows the story of Phoenix Wright as he tries his best to defend innocent people. As Wright the player investigates crime scenes, search for clues and ultimately trying cases in court. Each game has a number of cases to try as well as an overarching story as Wright battles rival prosecuting attorneys. 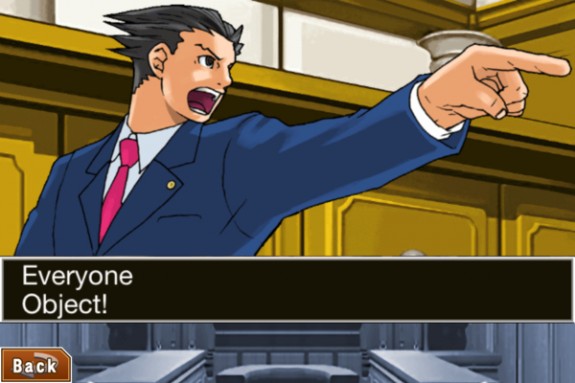 The iOS version of the games includes some new social features, including a mode that let gamers “share dissatisfaction with everyday life, Phoenix-style!”

Phoenix Wright: Ace Attorney Trilogy HD will come to the App Store for free. Capcom will let gamers play the first two missions of the first game for free. After that, they can buy the full first game for $5.99. The two sequels, Justice For All and Trials and Tribulations will cost $6.99 each. Gamers can also choose to buy all three at once for just $16.99, which is less than just one copy would cost at retail, or (more realistically, given the games’ rarity) eBay.

The original Phoenix Wright Ace Attorney is already available on iOS, but it ‘s more of a direct port of the DS game that doesn’t look as good as the HD trilogy. The game translates very well to iOS, as the DS versions relied on the touchscreen for much of the game.

The HD trilogy is a good place for those interested in the games to start. By the time gamers get through all three games, Phoenix Wright: Ace Attorney – Duel Destinies might be available on the Nintendo 3DS eShop.