Following rival products from both Logitech and Moga, pictures of an iPhone controller from Razor have leaked online.

Pictures and the code-name for the controller were leaked by Evleaks this morning. Dubbed the Razer “Kayzuyo,” the controller looks a lot like the iPhone controllers that have been officially announced by other companies.

The Razer Kazuyo that is depicted in these photos features a directional pad on its left face, with Pause X, B, Y and A buttons flanking an iPhone docking area on the controller’s right. It appears that users may be able to adjust the tilt of their iPhone when it is inside the controller as well. Razor’s smartly carved out what appears to be a speaker grill so that buyers can still use their iPhone’s speakers when it’s docked with the controller instead of relying on headphones.

There are also left and right bumper triggers on the Razer Kazuyo, however they are a bit difficult to see in these leaked pictures. Unfortunately, today’s leaks didn’t include a price or availability. As such, there’s no telling when users might actually see the Kazuyo on store shelves. 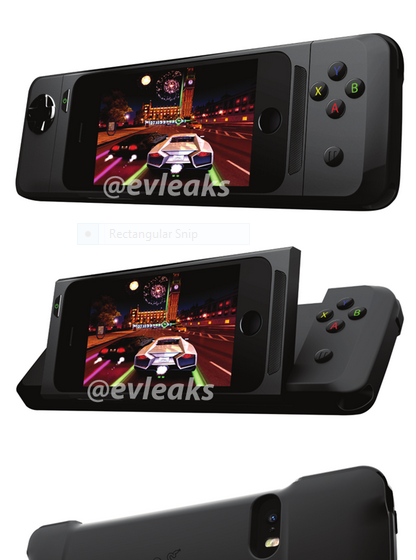 The Razer Kazuyo, shared by EVleaks.

Pictures and leaks concerning iPhone specific controllers have slowly began to pick up. Apple first announced that it would include support for gaming controllers with iOS 7 during the summer, however the company has been quiet about any progress on the gaming controller front ever since.

Only two iOS7 controllers with official Made for iPhone licensing have surfaced so far. The Moga Ace Power costs $99 and includes the same buttons as the Kazuyo. However, it adds two front-facing joysticks and an internal battery pack to the equation. Users can also slide the device closed for travel.

It’s Apple’s hope that enabling companies to make an officially supported iPhone controller will help it gain market share in gaming genres besides the few it already dominates. While casual games on the iPhone are big business, success with games that don’t play well on a touch screen have eluded iOS developers so far.